Us and Them? Bridget Anderson on Migrants and Nation-States 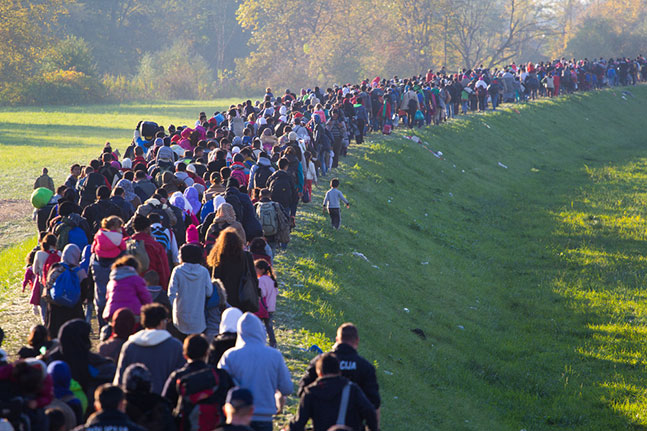 STEPHANIE SY: You're listening to Ethics Matter. I'm Stephanie Sy, and I'm speaking with Bridget Anderson, professor of migration and citizenship, and research director of the University of Oxford's Center on Migration Policy and Society. She is the author of Us & Them? The Dangerous Politics of Immigration Controls.

Bridget, thank you so much for being with us.

STEPHANIE SY: I want to start with this word "migrant," which has come to mean a term encompassing refugees fleeing persecution and conflict, as well as people who are just looking to move countries for economic reasons. What does the word "migrant" mean to you?

BRIDGET ANDERSON: I do think that "migrant" is a very difficult word, not least because it tends not to be used of people like me. It tends not be used of professors or bankers and financiers. You will find that British people in Hong Kong or Europeans in many African states are referred to as expatriates rather than migrants. So I think that it has a very particular connotation, and I think it usually means basically somebody who is imagined as hard-up, low-skilled, and/or desperate, as we see now with the Syrian refugee crisis.

STEPHANIE SY: So is that word a construct and in some ways a cover for discriminating against certain groups?

BRIDGET ANDERSON: It definitely is a construct. In some ways, I think—speaking as an academic who has spent most of my life in migration studies—that one problem is that, really, this is a policy term that has become an analytical term. That's kind of quite tricky in some ways. I think you have the same kind of issue with words like "criminal." This isn't to say that it is not valid to research and talk about migrants, but I think we have to be very careful in terms of the ways in which we reify them and make them into certain kinds of subjects. Sometimes being a migrant—that is, a non-citizen—matters and sometimes, actually, it is of secondary importance.

STEPHANIE SY: Part of your focus is looking at immigration controls and keeping migrants out. I want to look at that historically for a second. My understanding is for nation-states it hasn't always been about building fences to keep people out, but in fact to keep people within a nation's borders. Talk about that.

BRIDGET ANDERSON: If I was going to locate the origins of immigration controls, I would, first of all, locate them even before the construction of borders to keep people in and look at the ways in which people's mobility was controlled within a realm, within what we would now call a state, but a few centuries ago would be within a kingdom or within a feudal overlord.

I think if you actually look at the control of vagrancy and the mobility of the poor in early modern Europe—if you are looking at the 14th century, I suppose, and onwards—then you can see a remarkable similarity to the ways in which immigration controls now operate and are imagined. The fear was that people were leaving their lords, their feudal masters. They were selling their labor—that is, there was a risk to the labor market—but also to what we would now call social cohesion, because you had masterless men. You had people who were uprooting or upending the way that society was supposed to be, which was a feudal society, by leaving the lands and leaving their lords.

So I think, once we start seeing immigration controls as being about controlling, first and foremost, the mobility of the global poor, then we can see, well, the mobility of the poor has actually always been controlled, or that it has always been sought to be controlled. Actually, looking at vagrancy and sometimes the forced mobility of, say, transportation or indentured labor, and indeed slavery, I think we can start making connections between those and contemporary attempts to control migration.

STEPHANIE SY: Let's dig a little deeper into that part of it and the control of a labor force. In fact, you write in one of your essays that the word "state" actually derives from the term "stasis," or immobility. What about what you just talked about when it comes to the slave trade, when it comes to the maintenance of a proletariat, as you have called it? What about that led to passports and stricter border controls, to eventually keep foreigners, if you will, out?