Time for a New Macroeconomics Realization

Unfortunately for the progress of the human race we seem to know very little about how to govern ourselves and the result is a lot of guesswork without apply much science or logic. But there is a means for better understanding of how our system of society or macroeconomics actually functions, which I have developed and which I can supply.

The past history of macroeconomic thought contained several impotant steps toward this development of this science, but it fell short in recent times. This was due to the control of the subject excerised by the many big corporations whose money was used to keep the universities and other teaching establishments in line with their monopolistic needs and behavour. Thus the vast number of people whose found this subject confusing and were uninclined to be interested were led by a smaller group of academics who had been (unknowingly) deceived by an even smaller number of industrialists and bankers and politicians!

My big news is that although, according to Mark Twain you can fool all the people some of the time, there is now the means available for entering into this subject of self-government as an exact (well almost) science and to see and understand what it is and how it works. This is the direct result of the research that I have been doing over many years, whilst being employed in engineering for the greater part of my professional life.

Naturally I have chosen an engineering approach to this problem. A little thinking about it soon leads to the need for modeling the macro-economy. For this purpose I use a number of different expressions, one of which I wish to share here, in order to introduce the way in which this subject becomes logical and almost exact. Please examine the following graphic carefully since it was constructed after a lot of thought was given: 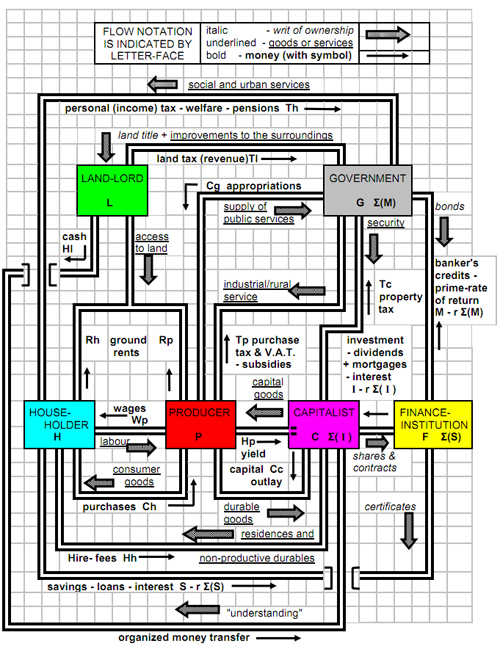 Thanks for this diagram attachement at the end. It looks great!