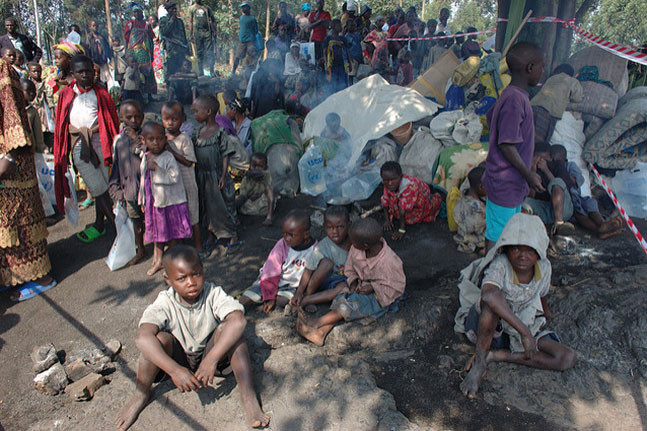 JOANNE MYERS: Good afternoon. I'm Joanne Myers, and on behalf of the Carnegie Council, I would like to thank you all for joining us.

Sarah Costa is our speaker this afternoon. She is the executive director of the Women's Refugee Commission. She is responsible for the organization's research and advocacy work—all that is necessary to protect and empower women, children, and youth who have been displaced by conflict and crisis. She is an experienced and passionate advocate for women and children, as a reading of her bio will indicate. I believe you all should have received a copy, and I hope you will have read it by now. I can only say that the Women's Refugee Commission is very lucky to have her leading the cause.

We have invited Sarah here today to talk not only about the over 65.3 million people who have been forced to flee from their homes because of war, persecution, and terrible human rights violations, but because many of these refugees, internally displaced individuals, who are seeking asylum are women or children, whose case for their protection is often ignored, which is morally indefensible. In the next 30 minutes or so, Sarah and I will have a conversation about the work of the Women's Refugee Commission and what should and can be done to help these women and children, to keep them safe. In the time remaining, we will open the floor to discussion so that you can ask any questions that weren't addressed during our conversation.

JOANNE MYERS: Sarah, I would like to begin by asking you just to talk a little bit about the global refugee crisis as you see it today.

SARAH COSTA: I think the first thing to say is that numbers are staggering. When you think about 65.3 million having been forced to flee their homes, these numbers are unprecedented. We haven't seen such numbers since perhaps the Second World War—in fact, when registration first started. So we are coping in the humanitarian system with great numbers. If you think about it, this may actually help you understand the dimensions of the problem. One in 122 people across the world have been forced to flee. That's incredible. When you talked about "many of them," the majority are women and children. In some settings, it's 80 percent, in some 75 percent, in part because so many men are killed in conflict. The numbers for us in this day are really difficult.

But I think it's also important to point out a couple of things that a lot of people don't realize. We are dealing with a very different humanitarian crisis today. Over 60 percent of people who are forced to flee end up in urban areas in non-camp settings. Yet the humanitarian system was actually designed to provide and deliver services to people in camps. So there is a bit of a disconnect there.

The other thing is that the average length of displacement is something around 20 years. When we think about the humanitarian system, it was really set up to save lives—quick-acting interventions, short-term interventions. Today we are really forced to think about what we do to really build stability, resilience of the population that is fleeing. They, as I say, on average are displaced many years. There are cases of women who are giving birth to children today that actually were born in camps.

We are seeing people in urban areas who are so hard to reach because it isn't a camp setting. Yet we have advocated a lot against camp settings, because people are confined and don't have freedom of movement. So we are dealing with a very, very different world.

If I can add one thing: The humanitarian system is expected to really cope with this crisis. At the same time, it's very isolated from the development community. If you start to think about more long-term strategies that build resilience of people, find them jobs, start to put kids back into school, we are really dealing with the development side of things. One of the key things that we are struggling with is how to bring these two sectors together so that we work together and really find more efficient solutions to this crisis.

JOANNE MYERS: It's right that we talk about refugees, but, as you said, so many of them are women and children. Maybe you could just give us a little background about the Women's Refugee Commission, how it was founded, why, and its mission.

SARAH COSTA: It was founded, I think it was 29 years ago. It was founded by a group of women who were attached to or part of the board of the International Rescue Committee, the IRC. One of the reasons it was founded is because the board members would go to the field and they would see that even women's most basic needs were not being addressed. They were delivering in fields without any health services being provided. They were struggling to get food, because at the lines for food—men would push them out of the way. The organization really was founded to start to think about how we could better meet the needs of women and children.