In the midst of the controversial pork barrel scam, the Filipino people had signified disgust and anger on the way the taxpayers’ money is being spent by the government through the Priority Development Assistance Fund (PDAF) by lawmakers which eventually diverted into corruption involving lawmakers themselves, implementing agencies of the government, and non-government organizations (NGOs). The Million People March staged on 26 August 2013 during the Philippines’ commemoration of the National Heroes Day was a prelude to the Filipino peoples’ collective action and future mobilizations against cheating and corruption in the government.

A huge support seen in the historic Luneta Park in the city of Manila, the country’s capital, was a wake up call for the Aquino administration to take the necessary steps in addressing the pressing governmental challenge of the President’s remaining three years in office. The Million People March was participated in by the civil society groups, the academe, the youth and student sector, the religious groups, workers, and ordinary taxpayers and citizens who believe in the cause of the said event. Local celebrities also joined in the peaceful rally to show their unity with the rest of the Filipino people who were robbed of their hard-earned money paid to taxes. Filipinos in other parts of the country as well as abroad, and ‘netizens’, also expressed their unity and support through their own little ways. 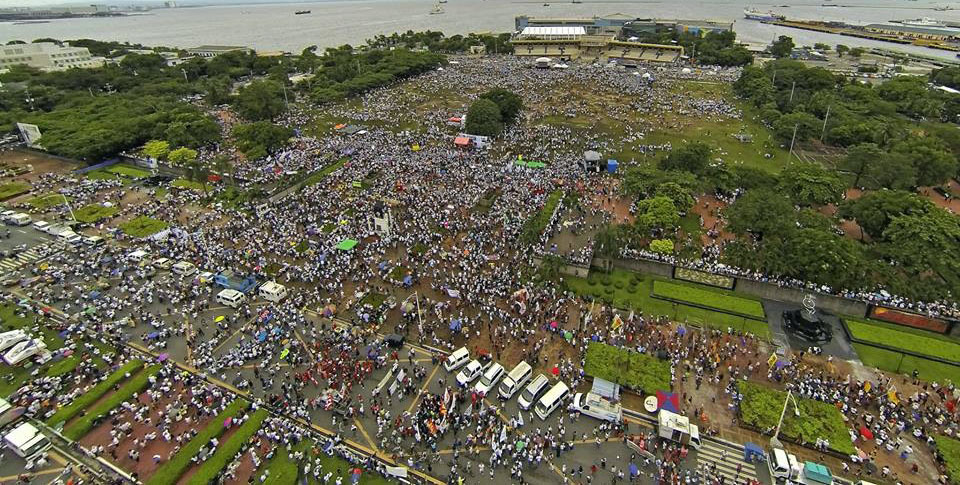 Likewise significant in the Million People March was the presence in Rizal Park of the Roman Catholic Church leaders, notably Manila Archbishop Luis Cardinal Tagle and other bishops. Leaders from other religious groups were there adding to the crowd of high spirited people, a scenario last seen during protests calling for the resignation of former President Joseph Estrada (now Mayor of the City of Manila) and ouster of Aquino’s predecessor, Gloria Macapagal-Arroyo (now a Member of Philippine Congress).

The moral fabric of Philippine government in particular, and of the Philippine society in general is what is stake here in the clamor for a corruption-free administration. Issues on pork barrel scam and spending of lawmaker’s pork barrel have brought the debate not only to the bureaucratic systems and processes of the Philippine Government, but also to the moral and ethical aspects of leading the country by the President and leaders whose mantra of governance publicly pronouncing for ‘anti-corruption.’

Philippine leaders who have access on similar funds coming from the national coffers, public funds per se, must face the ethical and moral aspects of public service and governance. They would be facing a great political divide on the issue of spending such funds coming from every Filipino taxpayers. Where does moral leadership come into play? Are Filipino leaders still ethical public servants?

An author once said that “to be in public office is to make a sacrifice.” Such dictum tells us that being an elected public servant, one has to serve the public with a high standard of honesty, integrity and professionalism. Thus, for lawmakers who view public office as a ‘milking cow’ so as to spend the peoples’ money at their own whims and caprices, shall address the following questions?

These questions require not only constitutional and institutional responses, but more importantly, ethical answers with much consideration on the human and societal development. It is imperative that pork barrel funds are essential component of the Philippine budget. And budget is a foundation of economic management of a country, and therefore, in the context of developing countries, it is primarily an issue of development (Kohei Noda 2011). Thus, corrupting taxpayers’ money and public resources to the great prejudice of the majority, the less privileged and marginalized in society, runs counter to any standard of ethics there is in public service.