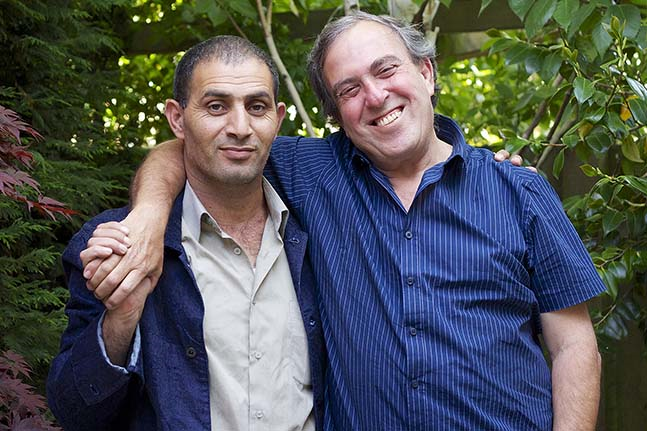 Middle East peace talks have stalled. The 2014 war in Gaza caused the deaths of more than 2,000 people and destruction totalling billions of dollars. Yet a group of 600 Palestinians and Israelis who have lost family members during seven decades of conflict have turned their backs on thoughts of revenge, and campaign for reconciliation. Peter Singer spoke to some of them.

The 600 Israelis and Palestinians of the bereaved families forum are struggling to build bridges between their two communities, although they have more reason than most to distrust 'the other side.' All of them have suffered the death of a close relative—a child, a parent, a brother or sister—in the recurrent violence that has beset the region for the last 70 years.

But they are determined not to advocate retaliation. Instead they are committed to creating understanding between Israelis and Palestinians, building the trust which they believe is an essential precursor to peace. In the process, many of them have forged close friendships across the religious and physical barriers to peace.

"When my daughter was killed, my first reaction was rage," says Rami Elhanan, an Israeli graphic designer whose daughter, Smadar, was blown up by a suicide bomber in central Jerusalem.

"Anger is very powerful: it sweeps you away. But then I started asking myself questions. I knew that killing someone would not bring her back, and I knew that causing pain to someone else would not ease my pain.

"So as a rational person you start to look for answers. Why did it happen? How could such a horrible thing take place? What can cause someone to be so angry that he is willing to blow himself up with a 14-year-old girl?"

Rami's search for answers led him to the Parents Circle-Families Forum (PCFF), a group of Israelis and Palestinians who believe that peace will not come to the region through political posturing but only through ordinary people getting to know and trust one another. To move things on, they run a wide variety of projects designed to get Israelis and Palestinians to take the first momentous step—just sitting and talking to each other.

The first Forum meeting he attended struck him like a thunderbolt, Rami says.

"I still remember it as if it was yesterday. I watched the people getting off the buses—bereaved Palestinian families coming towards me, shaking my hand, hugging me, crying with me. It was a complete shock, and it changed my life completely. I was 47 years old and it was the first time I had ever seen Palestinians not as workers in the street, not as terrorists, but as human beings."

There is a carefully maintained separation between Israeli and Palestinian societies, Rami says. Israeli society hides itself not just behind physical walls, but also behind walls in the mind. Every Israeli child goes through a brainwashing process which is designed to conceal the Palestinians from him. Palestinian and Israeli children alike undergo a socialising process, intended to enable them to sacrifice themselves when the time comes, he argues. This is done by demonizing and dehumanizing the other side.

"This is why that first meeting was so emotional and so shocking to me. I saw people carrying the same burden that I carry. I saw people who suffer exactly as I suffer. I saw an old Arab lady coming down from the bus in her long, black, traditional dress. She had a picture of a six-year-old child on her chest, just like the one my wife carries of Smadar. This experience changed my life."

Rami's reaction has been to chip away at the barrier of ignorance and misunderstanding between the two divided societies. Together with his Palestinian colleague, Bassam Aramin, who lives in Anata on the West Bank, only 20 minutes away but beyond the "separation barrier," he lectures to groups of teenagers in both Palestinian and Israeli schools, explaining the futility of violence, how hatred breeds more hatred.

"Just seeing us together is an earthquake for most of these kids," Rami explains. "It's the first time they've ever seen an Israeli and a Palestinian together, calling each other brothers, not fighting, not trying to compare whose pain is bigger.

"At the end of the class if one kid is nodding his head in agreement, we've made a little crack in the wall. If we've saved one drop of blood, it's a miracle. If the Forum arranges a thousand lectures a year, we're reaching maybe 40,000 individuals. Then those kids go home and they tell their parents: it's like a ripple effect."

Rami and Bassam are united not just by their tireless campaign for inter-communal understanding, but by a gruesome symmetry of suffering. Bassam's daughter Abir was born in the year of Smadar's death. Ten years later, Abir too was killed, shot in the head outside her school with a rubber bullet fired by one of Israel's border police.

Rami recalls: "When Abir was shot, it was like losing my own daughter again. I was in complete despair, overcome by frustration and anger. I asked Bassam, 'What are we going to do now?' and he said to me, 'Well, God is testing us."'

"I didn’t think about revenge," Bassam explains. "If you consider violence you are a victim again. I decided not to be a victim.

"If I killed an Israeli or 100 Israelis it would never bring Abir back. It would just create more victims, and then more killers. We have to break the circle of violence.

"You have to use your pain, your tragedy, in a different way. One Israeli soldier killed my daughter. But afterwards more than 100 ex-soldiers came and made a garden in the school yard in her memory. It sent a very strong message to the local community."

Bassam insists that peace will eventually come to Israel and Palestine.

"There's no alternative," he says. "I don't believe it's our destiny to continue killing each other for ever. It's a matter of time. A two-state solution? One state, two states, five states, ten states. It doesn't matter. But it will happen.

"If Rami and I can sit down and talk, everyone can do it."

In the rural village of Hibbat Tsion, 60 miles north of Jerusalem, retired math teacher Tsurit Sarig plays host to another visitor from beyond the barrier—Aisha Khateeb from Nablus. Like Bassam and Rami, the two women have been thrown together by shared grief. Aisha's younger brother Mahmoud was shot in the chest by an Israeli soldier; Tsurit's 22-year-old son Guy was shot by a sniper while serving as a lieutenant in the army.

They met through a Families Forum project, in which pairs of women from across the divide collaborated to take photographs illustrating each other's bereavement and loss. Their photos eventually went on show in a public exhibition in Tel Aviv. Just getting together to plan photography sessions was a major challenge, given the strict security regulations which complicate West Bank Palestinians' access to Israel.

Aisha says: "What we have done together is a first step towards a better future. When Tsurit came to visit me in Nablus, she was the first Jew to come to my family's house for 44 years. She is one of us—she's not like a foreigner coming to our house. All my family came 'round and wanted to talk with her.

"It's not something complicated; if we want, we can do it . . . Knowing each other, breaking the ice, getting away from the traditional ideas which we learnt from the past, from our parents and their parents.

"I can understand Tsurit's suffering. I can understand how she feels when she talks about her son, because I am a mother. Nothing is more precious than our children. I have two boys and four girls of my own. Even if you had 100 children you wouldn't want to lose one.

"Tsurit and I are looking at the future of our children. We don't want them to have the same kind of experience we have suffered."

Tsurit adds: "It's very important for me to know that there are Palestinians who are against violence and wars, who want what I want—to live in peace, side by side, not one above the other. On both sides, in Israel and Palestine, there are people who imagine they can live here without the other nation, that somehow the others will vanish. But I don't see life this way: it's not logical.

"When Aisha and I work together we see that there are people to talk with, who want to be our partners in this work. It's very slow, difficult work and some people don't approve. But as we say in our lectures, if we can sit together and talk after what we have been through, anyone can do it; and the politicians should do it until they come up with a result.

"Aisha and I are good friends, but we don't have to share the same opinions about everything. When we met at the women's group I spoke about Israeli youngsters going into the army. I said they have to, it's an obligation. This doesn't mean I support the occupation. It was very difficult for Aisha to hear me say this. But we try to talk about it.

"When I first came to her parents' house in Nablus, they didn't know anything about me, about the project or anything. The most touching part of my visit was simply to sit with Aisha's mother. Although we could barely communicate, I could feel her empathy. She said she wanted to come here and visit my home."

Aisha says one of the big benefits of working in the Families Forum is that she no longer worries so much about the safety of her six children. Before the family was involved in the Forum, she concedes, her sons used to throw stones at Israeli soldiers. But not any more.

"They have a lot of very good Israeli friends now and they don't believe in fighting with Israelis. They would always try to find another solution, by talking rather than by fighting, because they don't want to lose one of their friends.

"For me it's great—I can be sure my children are going to be okay. Maybe they will have some other kind of accident, but at least I know they won't be blowing themselves up."

These are some of the projects run by the Forum:

This article was written by Peter Singer who is a London-based journalist. Mr. Singer has worked on the foreign desk of The Times and as editor of an education weekly.

Great story - Peace through Individual dialogue and mutual forgiveness to end cycle of hatred and violence.