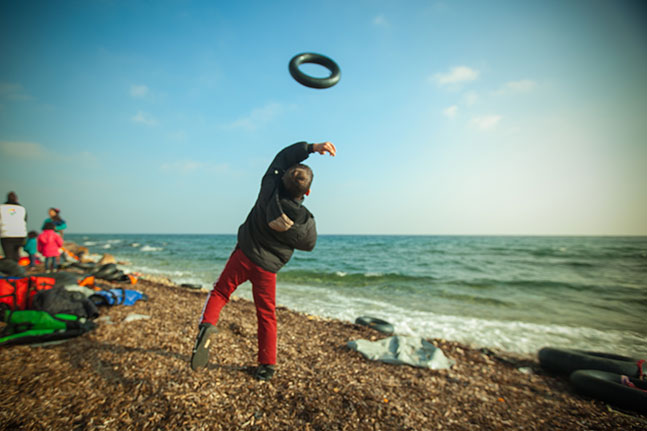 After a harrowing journey over the sea, this young boy throws his inner tube back to the ocean. He conquered it. He survived. This is one victory of many which still need to come in order to find a safe home in Europe. CREDIT: Tyson Sadler

For its sixth Instagram take-over by photographers from around the world, Carnegie Council presents Tyson Sadler's photos from the Greek island of Lesbos, taken in November 2015.

In the largest refugee crisis Europe has experienced since World War II, increasing numbers of refugees and migrants are taking their chances aboard unseaworthy boats and dinghies in a desperate bid to reach Europe. Lesbos is one of the main landing points for people making the dangerous journey across the Aegean Sea.

As the director of special projects for RYOT VR, Sadler has been on the front lines of some of the biggest recent news stories. He covered Europe's refugee crisis from France, Greece, and Lebanon and his most recent work is "The Crossing," a nine-part series hosted by Susan Sarandon. Filmed in December 2015, it details the harrowing experience of refugees crossing the Aegean Sea from Turkey to Lesbos.

To see more photos from the front lines of Europe's refugee crisis, follow @tysonsadler and visit his website at www.tysonsadler.com.

Carnegie Council hosts a new Instagram take-over every month. Check out the previous photographers and look for the next one in early June:https://www.instagram.com/explore/tags/ccthrumyeyes/.