What made this epic to defy the jaws of time and remain alive in billions even after thousands of years it was first told?
What is the relevance of this epic on today’s world-today’s first paced world when human is running towards an uncertain future.
Why the generation Y who does not know anything except them will think of that old valued classic will think about it, leave aside reading it?
Because this epic can take them to the path of self realization, give them a break to think where they are running to and for what.
This epic Ramayana teaches us to think for others-the epic is itself a saga of self sacrifice. Rama-the noble eking had calmly accepted the ordeal of exile in spite of no fault of him and to honour the words of his father. Sita accepted the hardship of living in a forest inspite of being used to the luxury of a palace to respect the marriage bond. Laxman had accepted the hardship of forest life and facing the danger to honour the bond of siblings and last but not thee least Bharat had sacrificed the kingdom only to honour his brother can be an eye opener to the society at large.
When human values are becoming increasingly rare –the family values, ethics, moral values are becoming rare words to be found in dictionary alone this teachings are invaluable to the modern day society. On this despairing backdrop the epic assumes special importance to offer invaluable teachings of life.
what can be a more better book than ‘Ramayana-the game of life’ book two Shattered dreams by Subha Vilas to teach these lessons –where the storyline is extended over Ayodhya Kanda and depicts the story of Rama’s coronation in the city of Ayodhya, the exile into the forest and the regency of Bharat.
We have already discussed the uniqueness of Subha Vilas’s book in our earlier review and don’t intend to go into depths of that again. So let us straight go into the storyline which is in waiting for us to offer endless joy and happiness!

Mental turmoil of Dhasaratha has been well captured by Subha Vilas at the onset of book two. He was fighting with the demon within him-the curse of an old blind parent was haunting him even in his dreams. The emotional storm within his mind is articulated in such a way so as to mesmerize every reader. Let us take glimpses from the book 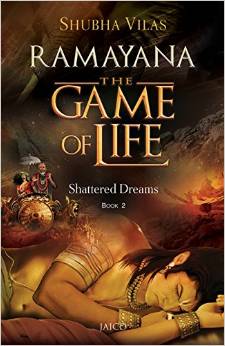