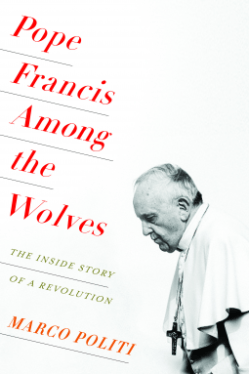 Marco Politi, long-time Vatican-watcher and brilliant journalist, just published a book on the papacy of Francis.  An admirer of the pope’s surprise “revolution,” Politi writes that Francis’s formidable opponents make it far from certain that he will succeed.  I was honored to be asked by the Carnegie Council for Ethics in International Affairs to interview Politi for a live audience and webcast about the book, Pope Francis Among the Wolves (Columbia University Press, 2015).  You can see the September 30 video of our interview here.

On that date, just as Pope Francis had left the United States and returned to Rome, news broke that he had met privately with Kim Davis, the Kentucky county clerk who had been jailed for refusing to issue marriage licenses to same-sex couples.  In a general op-ed uproar, U.S. liberals felt betrayed and conservatives felt vindicated.  Within a few days it came out that enemies of Francis within Roman church leadership likely set him up to seem to do something contrary to his inclusive message and ruin the good vibes of the American tour.  As the story unfolded, Politi’s book looked like a prophecy.

If Politi knew or suspected that night at the Carnegie Council that events would play out this way, he did not say.

Politi did tell me before the show, however, that he liked better the first cover proposed for his book, shown here.  Francis’s head is downcast.  He looks like he is leaving a scene of grief, or carnage. The press marketing department decided the photo was too sad.  Politi agreed; a book is meant to sell.  The new cover shows Francis with a modest smile.

But all the more, we now see what Politi’s book is about.  Even joyful revolutions are still wars.  We might see Francis smiling, but there are wolves.

This piece was written by Julie Byrne.

Access the audio and transcript of the Carnegie Council event here: http://www.carnegiecouncil.org/studio/multimedia/20150930/index.html

IMHO, Pope Francis is a Courageous World Religious-Peace Maker-Leader who has spread the messages of: "the golden rule", a common good, a common home, a common humanity and forgiveness and reconciliation - the Messages of Jesus. When you're upfront leading on complex religious- political issues, you're bound to make enemies who try to set you up and extremist religious zealots.  Frankly, I'm concerned for his safety as he travels the world in his PopeMobile and goes into crowds to greet people and spread his love to the: poor, sick, elderly, children.Thank You Pope Francis !