No Peace in Syria without Justice 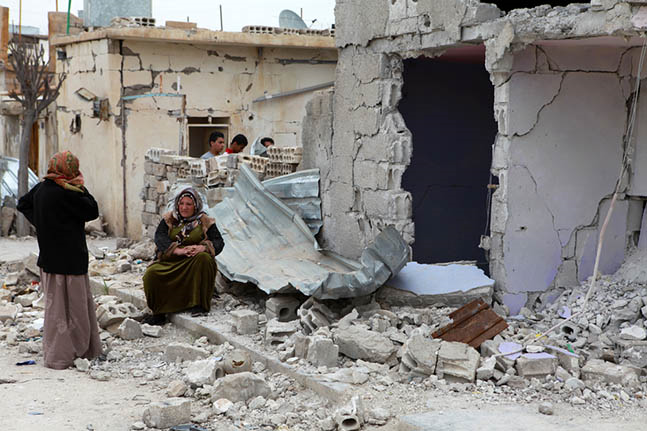 Europe's refugee crisis has pointed a much needed spotlight on the crisis on Syria. Half of all refugees coming to Europe are Syrians—and their exodus is being fuelled by the violence and destruction all too rife across Syria.

A significant portion of that violence is being caused by ISIS. But by far the largest portion—roughly 75 percent—is being committed at the hands of Assad's forces. Assad's warplanes and helicopters have accounted for more than 50 percent of all civilian deaths in 2015, and his deadly barrel bombs have made entire cities uninhabitable. Over the past four years, Assad's forces have tortured more than 11,000 political prisoners to death, including women and children. They have sought to silence dissent by starving entire cities into submission. Without exception, these atrocities and human rights abuses have provided a recruiting tool for foreign extremists, and helped ensure the unprecedented out-flux of Syrians to Europe and beyond.

This month, the Human Rights Council of the United Nations will open its 30th regular session and Syria will once again be a major part of its agenda. In my role as the Syrian Coalition's Special Representative to the U.S. and UN, I hear some UN Member States draw the misguided conclusion that we should co-operate with Assad in the name of countering terrorism. This approach is counterproductive. It is also dangerous. Assad has never been, and will never be, a partner for peace or a constructive member of an anti-ISIL coalition. To the contrary, he has actively worked to derail the peace process and sought repeatedly to strengthen extremists' presence on the ground, actively funnelling money into ISIS coffers and deliberately avoiding targeting ISIL strongholds on the battlefield. Time and again the evidence has proven that cooperation with Assad will only intensify the Syrian conflict, undermine any hope for a sustainable political transition, and threaten the peace and security of the international community.

That is why the need for justice and accountability must be at the forefront of any political process in ending the Syria conflict. As UN Secretary-General Ban Ki-Moon stated to the UN Security Council on July 29, the lack of accountability in Syria is responsible for "atrocious crimes," which are now "almost an hourly occurrence." Only when the culture of impunity is addressed will the prospect for a political solution become genuinely viable, and can we begin to stop the flow of refugees from pouring into Europe. To do this we need an alternative route beyond the UN Security Council to refer the situation in Syria to the ICC; practical support to groups documenting human rights crimes in Syria; intensified sanctions; and a reassessment of the 'ISIL-first' strategy, starting with the enforcement of a no-fly zone.

Assad's forces, alongside foreign fighters comprised of Iranian militias, Hezbollah, and extremist groups, commit war crimes and crimes against humanity with no concern for consequences. An ICC referral would establish clear consequences that will make these criminals reconsider their actions. While the UN Security Council is typically the body to refer the situation in Syria to the ICC, Russia's unconditional support for Assad will likely result in another veto. That is why alternative mechanisms for accountability must be explored. This includes the option of an ad-hoc or hybrid tribunal, involving a mixture of international and Syrian judges who have defected from the tyrannical regime. As seen in Cambodia and Sierra Leone, hybrid tribunals are a feasible outcome for bringing justice to the victims of human rights crimes. Another option is for our international partners to open cases against Syrian human rights perpetrators in national courts under universal jurisdiction, as when Rwandan suspects from the 1994 genocide were tried in France. Ultimately, whatever option we choose, the pursuit of accountability must be a part of any future peaceful settlement, for there can be no peace without justice in Syria.

NGOs and activists documenting human rights crimes in Syria play an important role in collecting evidence for future trials. International partners should increase practical support for these groups, such as the 'Caesar' project, which documented the deaths of more than 11,000 Syrians inside Assad's prisons. The project's photographs, however difficult to view, must be shown globally as a reminder that the victims of the Assad regime need justice and impunity must end.

Sanctions against individuals responsible for human rights violations are an effective way to fight impunity. Unfortunately, despite growing evidence, many of Assad's closest cronies and his backers in Tehran and Moscow continue to escape sanctions. Targeted sanctions are now more critical than ever, especially in the wake of the Iran deal. Our international partners cannot allow the Iran deal to enable Iranian support to the regime to expand at the cost of Syrian lives. Sanctions must be intensified to prevent further escalation of the Syrian crisis and the threat of ISIL.

Since its rise in 2013, ISIL has brought untold brutality and suffering to the Syrian people. But the international community should not absolve Assad of responsibility through the flawed logic of an 'ISIL-first' strategy. To defeat ISIL we must defend human rights, make accountability a reality, and protect Syrians across all of Syria, first and foremost by stopping the relentless torrent of barrel bombs that kill innocent men, women and children across Syria, through the enforcement of a no-fly zone. A no-fly zone would stop the leading killer of civilians in Syria. It would help stem the flow of refugees to Europe and elsewhere. And it would create the conditions need to kick-start a political process in Syria.

More than four years since the start of the revolution, accountability and justice in Syria seem distant prospects. But amidst the heightened military efforts of the Assad regime, we must not lose sight of the end goal: a democratic, free and just Syria for all Syrians. Accountability and justice will be a component of the peaceful solution we need.

This article was written by Najib Ghadbian who is an associate professor of political science and Middle East Studies at the University of Arkansas.

Excellent article.  Seems to me UN-NATO-Arab League need to take concerted political-military-diplomatic action against Assad, as well as ISIS to convince Russia and Iran that supporting Assad is a losing proposition for their longer term interest  -enough death, destruction, and refugees.