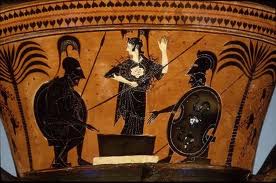 The will to power, what the Germans have called der Wille zur Macht, has been a constant characteristic of inter and intra state politics across ideological and geographical boundaries. In that sense, the struggle for honor and prestige has in many a case determined the personal conduct of political leaders; the foreign polices of states; and drawn the thin line often separating peace and war, rebellion and stability, barbarity and harmony. Surprisingly the Ancient Greek and Chinese philosophical traditions have both examined the “will to power” and the struggle for recognition. These traditions looked for ways to neutralise individualistic over-expansion of glory and instead follow a realistic path to good governance and happy life.

The man who started all, Plato, in his famous allegory of the charioteer has provided the first serious definition of “Thumos” (search for honor) in Western political theorizing. The Charioteer, logos or reason, is trying to control two horses. The one horse is Eros or desire and the other is “Thumos” or passion for recognition. Plato’s chariot resamples the human psyche in a tripartite system where individuals have an innate tendency for love, honor and rationality. Yet if  “thumos” becomes preeminent among the other parts of the psyche, then individuals will go to great, often immoral lengths in their quest for prestige and honor. In that sense as Francis Fukuyiama has pointed out, a distinction can be made between “Megalothymia” which characterizes individuals that wish to be superior to others, and “Isothymia” which characterizes individuals who look for equality.

Chinese philosophical tradition had also underlined the importance of “thumos” in personal conduct, and ethical intra and interstate politics albeit in a more indirect way than the Greek philosophers. The concept of ren 仁， translated in English as humanness， had been at the core of China’s Confucian philosophy*. Confucius defined “Ren” as the quality of an individual to advance others as much as herself. Put it else, Confucius made an implicit call for cultivating “Isothymia” as a moral principle of political behavior. This is a fascinating realization, for the Western and Eastern political philosophy reached to an almost identical conclusion about the foremost personal trait of political life. Isothymia should therefore initiate a new debate within the Realpolitik club that can offer new insights for managing the relationship of rising China with the United States. Equality should be at the center of the relationship supported by trust and confidence building policies. A quick observation of the history of hegemonic transition offers ample reasons for more Isothymia.

When the Spartans, the long perceived leaders of the Greek city-state system, asked the Athenians to end the devastating embargo against Megara, Pericles, the first citizen of democratic Athens, argued that only arbitration could provide a fair resolution of the dispute, for Athens had been a city with equal rights to those of Sparta and thus detested orders from the Lacedaemon. The Spartans declined and a devastating war broke out among Greek city-states paving the way for Philip and leading to the end of democratic innovation or to what Cornelius Castoriades has famously framed as the end of the ancient Greek democratic innovation.

Thousands of years later the Napoleonic syndrome for “megalothymia” bled Europe for more than a decade leading to the levé en masse, giving birth to nationalism and setting the grounds for industrialized mass warfare. History would repeat itself time after time with the Great War of 1914 as the epitome of competition for recognition and honor among states. Germany the biggest economy and most advanced industrial state in Europe attempted to equal British naval primacy and emulate Britain’s global empire. Such a perceived hubris could not leave London impartial. Kaizer’s struggle for supremacy clashed with the British equivalent and the poisonous gas soon drove humanity to new record levels of inhumanness and catastrophe. Similarly in the East, Japanese elites pursued their own version of “megalothymia” and engaged in a massive expansion over China and other Asian states.

It therefore comes to no surprise that the distinction between “Isothymia” and Megalothymia has important implications for the defining relationship of the 21st century: the relationship between China and the United States. China a rising economic, and soon military, behemoth has longed argued for equality in international affairs. Post-Mao Chinese foreign policy has been consistent in supporting national sovereignty of all states, vetoing invasions and putting no political conditions (other than the non-recognition of Taiwan- a strictly historical and internal Chinese issue) in China’s Official Development Assistant. So important has equality been in China’s foreign policy that when the United States asked for Chinese support to invade Iraq after Sadam Hussein’s invasion of Kuwait, the Chinese refused on the grounds that two wrongs do not equal right. Such a rationale has constantly been repeated within China to tame nationalistic historical memories of the Opium war and the century of humiliation, and to look to modern Europeans and Americans as partners rather than rivals who need to be punished for past wrongs.

While some theorists will immediately argue that Isothymia is a utopian concept and thus cannot apply to Realpolitik, a closer examination of the Greek, Chinese philosophical traditions but also of contemporary politics proves otherwise. It is not a mere coincidence that even politicians adhering to a common ideology engage in fierce attack against their fellow ideologues. This has indeed been a universal norm and ideological differences constitute simply the pretext for such immoral attacks. One may recall Stalin’s famous persecution of dissent; the power struggle within China’s communist party; the fierce often impolite and personal attacks against the character of political opponents in US primary elections, etc. In addition the Chinese Ren and the Greek Isothymia should not be confused with unworldly Christian pacifism. Ren and Isothymia are personal traits acquired with learning, self-questioning and open deliberation rather than arbitrarily divine revelation and prophetic inference. These principles are universal and independent of religious and ontological beliefs about the beginning of life and the role of the Creator.

From intrastate politics “Thumos” can easily be applied to interstate politics. “Like giant thymotic individuals, the behavior of states suggests that they crave recognition of legitimacy, above and beyond military expansion”. Here what comes to mind is the principle of  “Exceptionalism”; that is, of the beliefs of the governing elites of country A  that her polity, culture and societal values are superior to that of any other country in the world. While a great scholar had characterized exceptionalism as a euphemism for great power’s nationalism the definition should go deeper and examine the psyche of elites and their tendency for “Megalothymia”.

A recent example of “megalothymic” over-reaction in global politics was triggered by Chinese President Xi Xinping’s declaration on the “Chinese Dream”. Immediately many Western intellectuals argued that history has ended and that the Western political order constitutes humanity’s teleological political development. While the rule of law and the separation of power have endowed Western states with political stability and offered a regime friendly to domestic isothymia, other obstacles such as rising inequality and declining upward social mobility, still allow for inventiveness and creative action. Thus arguing that China, a country that traces its history in early antiquity with more than 1.3 billion citizens has no right to dream is a clear evidence of “Megalothymia” and of course it takes political discourse far from “Ren”.

The Tsinghua School of International relations led by Yan Xuetong has supported that China elites should follow a version of “Moral Realism” inspired by Xunzi’s political theory and try to lead by inspiration rather than coercion. At the same time, the country should respect the realities of international relations and cultivate strong “guardians” in the form of a capable military force but adhere to strictly non-interventionist principles.

If this concept of Moral Realism is complimented by a deeper understanding of isothymia and ren, it can possibly lead to a revolution is political theory and greatly contribute to the peaceful recovery of China. Of course similar narratives should be cultivated within the US elite circles. Washington D.C.** may well be the “city on the hill” but mother Earth can sustain more than a single hill. From Dehli to Brasilia to Africa more and more states will demand recognition and equality and more and more citizens within those states will look to satisfy their “thymos”. Aiming for Isothymia both domestically and internationally is not a choice but a priority for keeping the world harmonious and allowing human creativity to flourish.

Note: To build an even more robust theoretical framework, further interdisciplinary research in Political Science, Psychology and Neuroscience should be undertaken.

* A more popular version of Isothymia in Chinese tradition is found in the concept of “saving face”. Any individual who has lived in China can understand the importance of “Face” in the life of ordinary Chinese.

Comment by Valentine Olushola Oyedipe on February 3, 2014 at 1:53pm

Thanks Vasilis for the intellectually stimulating article.However, the tensions between Magalothyma and Isothyma instinct and proclivity in World Politiks cannot be ruled out of mankind. It must be noted that the Isothyma ideology as upheld by Confucius was hinged on moral principles believed to be ideal situation for  mankind when there is internal contradictions  regarding his instincts and the mechanism for his survival.Albeit, over ages the megalothyma instincts and tendencies have  always been exhibited when global politics is put into perspective. For those that argued that Isothyma is a an utopian concept must have taken cognizance of the primordial sentiments inherent in mankind.The question is where is the place of morality in global politics? or should we not at all pursue morality in global politiking? This brings us back to the tensions between moral realism and moral absolutism when global politics is in view. By policy implication, I believe that the version of moral realism inspired by Xunzi's political theory will be of immense benefit considering the tensions between the US and China and between the" west and the rest".