Just Out: "Update on the Rule of Law for Human Rights in ASEAN" 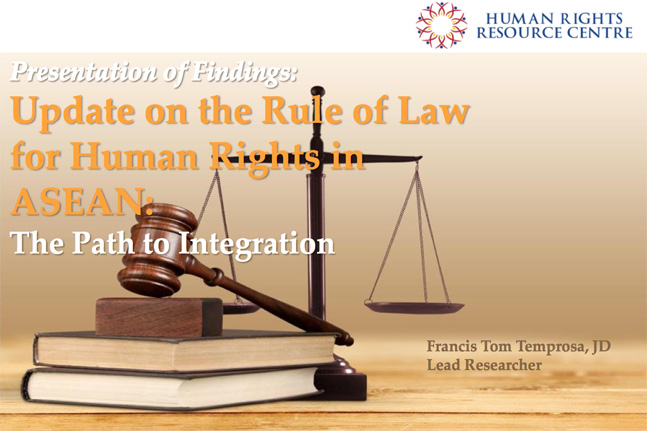 Update on the Rule of Law for Human Rights in ASEAN: The Path to Integration

Carnegie Council Pacific Fellow Francis Tom Temprosa is the lead researcher for an important new report titled Update on the Rule of Law for Human Rights in ASEAN: The Path to Integration. Composed of 10 Country Reports and a Synthesis Report, this study from the Human Rights Resource Centre in Jakarta, Indonesia, analyses the policy and legislative changes that have taken place in the ten ASEAN member states since 2011. It also considers whether these changes support or detract from ASEAN's vision of becoming a "rules-based" community.

The update is a follow-up on Rule of Law for Human Rights in the ASEAN Region: A Base-line Study, published five years earlier in 2011. Led by Mr. Temprosa, a Filipino lawyer and faculty member of the Ateneo de Manila University Law School, the new study first considers whether individual member states' commitment to establish and maintain the rule of law is being upheld by updating the 2011 report's findings around four formal and substantive central principles in relation to human rights, namely:

(i) Principle I: Whether the government, including its officials and agents, are subject to the law under the Constitution and other legislation
(ii) Principle II: Whether laws and procedures for arrest, detention and punishment are publicly available, lawful and not arbitrary.
(iii) Principle III: Whether persons have access to justice as the process by which laws are enacted and enforced is accessible, fair, efficient, and equally applied.
(iv) Principle IV: Whether justice is administered by a competent, impartial, and independent judiciary and justice institutions.

The update goes on to consider what progress has been made toward establishing a rules-based community of shared values and norms and whether the process of ASEAN integration has accelerated activity toward the creation of stronger legal institutions within ASEAN Member States.

ABOUT THE HUMAN RIGHTS RESOURCE CENTRE
The Human Rights Resource Centre is a non-profit academic center headquartered at the University of Indonesia in Jakarta, with a partnership network throughout Southeast Asia (currently in 7 out of 10 ASEAN Member States.)

CARNEGIE COUNCIL'S ASIA DIALOGUES PROGRAM PACIFIC FELLOWS
By conducting original, empirical research and facilitating educational exchange, the Asia Dialogues Program seeks to advance ethical inquiry around contentions within Asia and the United States. The Program's Pacific Fellows are leading scholars and experts who contribute to a worldwide discussion of ethical contentions in the U.S.-Asia context.

ABOUT CARNEGIE COUNCIL
Founded by Andrew Carnegie in 1914, Carnegie Council for Ethics in International Affairs is an educational, nonprofit, nonpartisan organization that produces lectures, publications, and multimedia materials on the ethical challenges of living in a globalized world.