Is the Map of the Middle East About to Change? 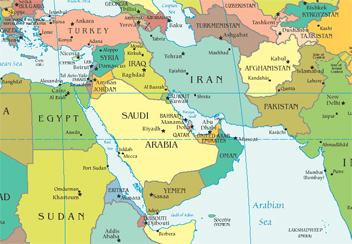 If people in the Middle East could democratically choose what country they lived in, would they choose the one they are in now?

Amidst all the talk of an Arab Spring, the fragility of the Arab state is often forgotten.

Whereas developed countries are almost always the product of an organic, internally driven process, in the Middle East’s case, the countries are mostly the product of a British-French agreement made in 1916 (Sykes-Picot) that paid little attention to local sociopolitical realities. As a result, few possess the historical roots, social cohesion, and legitimacy necessary to nurture the complex institutions that are a prerequisite for development and democracy. On the contrary, most suffer from both sectarian divisions and weak government—the causes of state fragility.

As Michael Hudson, Professor Emeritus at Georgetown University, explained in his classic study of the “legitimacy shortage” in Arab politics:

A legitimate political order . . . has to be [based on] some consensus about national identity, some agreement about the boundaries of the political community, and some collective understanding of national priorities. If the population within given political boundaries is so deeply divided within itself on ethnic or class [or, for that matter, religious or clan] lines, or if the demands of a larger supranational community are compelling to some [significant] portion of it, then it is extremely difficult to develop a legitimate order.

Without authoritative political structures endowed with ‘rightness’ and efficacity, political life is certain to be violent and unpredictable.

As I explained in my book on fragile states, these two structural problems—political identity fragmentation and weak national institutions—reinforce each other in a vicious cycle, severely undermining the legitimacy of the state and leading to political orders that are highly unstable and hard to reform.

Not all Arab countries suffer from these problems. Egypt, for instance, has deep historical roots and is therefore relatively cohesive. Morocco, Tunisia, and many of the small Gulf emirates (with the obvious exception of Bahrain) are also in pretty good shape by this standard.

The situation is most acute in places such as Libya, Syria, Yemen, and Iraq—all of which potentially face years of instability. Iraq has the Shiites, Sunnis, and Kurds. Syria has five main groups—Sunni Arabs, Alawis, Christians, Kurds, and Druze—many of which have their own divisions. Libya has 140 tribes and clans. And none of these states have a robust government apparatus that can competently implement laws and regulations in an equitable, independent manner—which would reduce the tension between groups. Whatever capacity they had was—or is being—decimated by regime change.

Lebanon and Jordan are not necessarily stable, but in better condition. Residents of the former already know the dangers of sectarianism from the country’s long civil war—and therefore will work harder than others to avoid a repeat.

The real wild card in the region is Saudi Arabia. Although it is not a product of colonialism, the country does have religious and tribal divisions and a government that may be seen by some as illegitimate.

The social divisions, weak institutionalization, and artificiality that plague all these states begs the question that I posed at the top: If people in the Middle East could democratically choose what country they lived in, would they choose the one they are in now?

The ballot box has already produced two changes to the map in recent years. The West Bank and Gaza split up because of an election. Sudan has been divided by a referendum.

If the Kurds were given the right to choose, they would secede from Iraq (as well as from Syria, Iran, and Turkey). The same might hold true for the people of South Yemen (independent until 1990), eastern Saudi Arabia, and so on. Groups that have strong identities, have historically felt disadvantaged by their minority positions, and live in a relatively coherent and homogenous area pose the greatest risks to the unity of the region’s states.

One creative effort a few years back to identify how the Middle East might change if the people could choose their own country produced the above map.

Obviously, most of the changes suggested are not going to happen. The process would yield much bloodshed, destabilize neighboring countries, and disrupt oil supplies. Most powers inside and outside the region oppose changes to borders for precisely these reasons.

In some cases, however, if the transition could be done relatively peacefully (think Czechoslovakia, not Yugoslavia), the peoples of both the seceding and seceded from areas might be better off. Libyans, for instance, might have an easier time building a robust state if they were working with two or even three different entities, each of which would be much more cohesive than the country is in its current form.

Although democracy must remain the ultimate goal, strategies to help fragile states emerging from long periods of imposed stability must be highly flexible if they are to succeed. Inclusiveness in politics, economics, and culture need to take priority, especially during difficult transition periods. Finding mechanisms to increase the robustness and impartiality of crucial government institutions are key if the state is to gain any credibility. Although people clamor for fast transitions, their long-term interests may be better served by extending the process over many years.

The Arab Spring will take a long time to play out—and the challenges the return of history has brought to light will not be easy to overcome.