India Leaps Big with Her Past Colonial Ruler

This is very natural to be emotional when premiers of a Nation which ruled another For 200 years meet on the invitation of former. With an open heart, clear vision and tough stand on terror Indian Prime Minister Narendra Midi paid state visit to meet England's Prime Minister Theresa May to discuss variety of issues and close multiple deals. World News Tomorrow Corporation's Asia Bureau Chief kept a close eye on this meeting and issues discussed during meet. He writes:
At the invitation of Prime Minister Theresa May, the Prime Minister of India, Mr Narendra Modi visited the United Kingdom (UK) as a Guest of Government on 18 April 2018. The two leaders held wide-ranging and constructive discussions and underlined our strategic partnership and growing convergence on regional and international issues.Prime Minister Modi will also participate in the Commonwealth Heads of Government Meeting in London from 19-20 April 2018. The UK and India have a natural ambition to reinforce our Strategic Partnership, based on shared values, common law and institutions, as the world’s oldest and largest democracies. We are committed members of the Commonwealth. We share a global outlook and commitment to a rules-based international system that strongly opposes unilateral actions that seek to undermine that system through force or coercion. We share the Living Bridge of countless personal and professional ties between our nations.
The UK and India will work closely together and with other Commonwealth member-states, the Commonwealth Secretariat and other partner organisations to address shared and global challenges. Both countries are committed to reinvigorating the Commonwealth, especially ensuring its relevance tosmall and vulnerable states and to our youth, who make up 60% of the Commonwealth's population. The Commonwealth Heads of Government Meeting is an important opportunity to address these challenges as we come together and unite under the summit's official theme "Towards a Common Future”. Specifically, the United Kingdom and India will make commitments to help create a more sustainable, prosperous, secure and fairer future for all Commonwealth citizens by taking action:
To promote coordinated global action to tackle plastic pollution including through the Commonwealth and India’s role as host of World Environment Day 2018.
To provide practical support to help Commonwealth member-states boost cyber security capacity;
To help Commonwealth member-states implement the World Trade Organisation (WTO)Trade Facilitation Agreement by providing technical assistance and increased support for the Commonwealth Small States' offices.
Technology Partnership
A UK-India Technology Partnership is central to joint vision and to India's prosperity, today and for her next generations. Both nations are at the forefront of a technology revolution.Both will share knowledge, collaborate on research, innovate and create partnerships between world-class innovation clusters. Two nations will deploy their complementary technological strengths to create high value jobs, enhance productivity, promote trade and investment and tackle shared challenges.
Both sides will scale up collaboration on Future Tech to tackle their  global challenges; realising the potential of Artificial Intelligence (AI); the digital economy; health technologies; cyber security; and promoting clean growth, smart urbanisation and future mobility – while developing the future skills and capabilities of our youth.
The Government of India welcomes the UK initiative of establishing a UK-India Tech Hub in India as part of India's growing bilateral Technology Partnership. The Tech Hub will bring together hi-tech companies to create investment and export opportunities and provide a new platform to share the very best technologies and advance policy collaboration including on Future Mobility, Advanced Manufacturing and Healthcare AI under India’s Aspirational districts’ Programme. India will establish a series of new partnerships between UK regional and Indian State-level tech clusters, to drive joint innovation and R&amp;D. With the support of both Governments while India have also announced an India-UK Tech CEO Alliance; signed a Tech UK/NASSCOM MoU focused on skills and new technologies, including industry-led apprenticeship schemes; and launched the new UK Fintech Rocketship Awards to boost fintech and wider entrepreneurship in India.
Both sides are deploying the best of British and Indian talent in science, research and technology to address priority global challenges. The UK is India’s second largest international research and innovation partner. The UK-India Newton-Bhabha programme will have lifted joint research and innovation awards to over £400 million by 2021, since 2008. India will also deepen it's joint working relationship on health to make the UK and India safer and healthier places to live, including through scaling up and rolling out AI and digital health technologies. 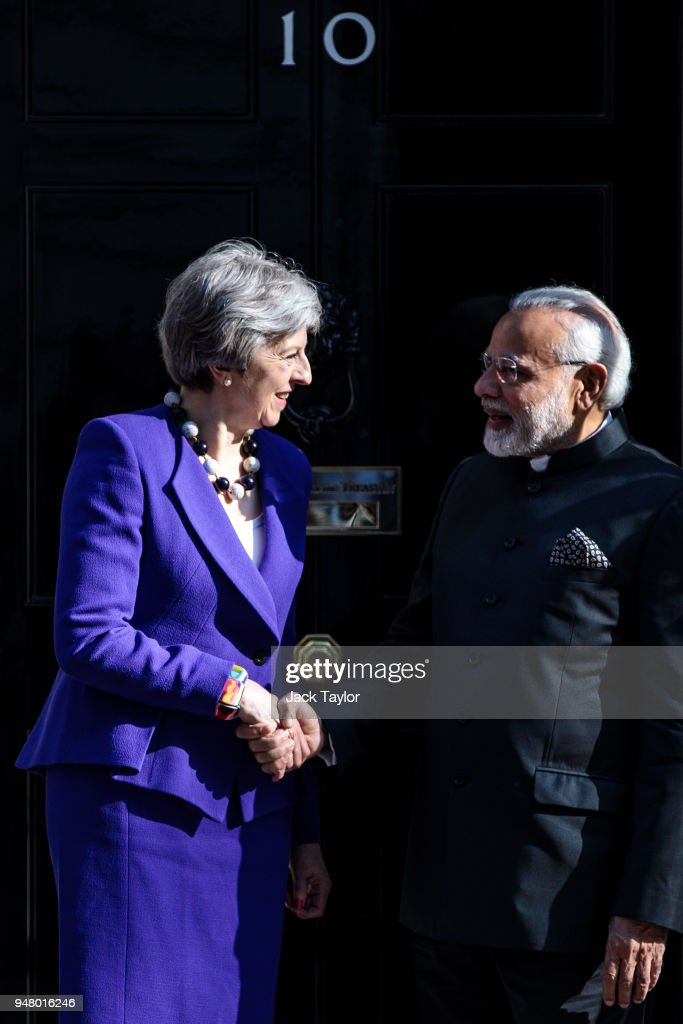 Defence and Cyber Security
In 2015, both nations pledged a new Defence and International Security Partnership (DISP) to make security and defence a cornerstone of thier relationship. The nature of threats that both face continues to change – so both must be innovative and agile in thier response. UK and India shall design, create and manufacture technologies that will address these threats; and thief security and military forces will share technologies, capabilities and equipment.
A secure, free, open, inclusive and prosperous Indo-Pacific is in the interests of India, the UK and the international community. The UK and India will also work together to tackle threats such as piracy, protect freedom of navigation and open access, and improve maritime domain awareness in the region.
Both have agreed to further enhancethier  cooperation to promote international security and stability in cyberspace through a framework that recognises the applicability of international law to State behaviour in a free, open, peaceful and secure cyberspace.
Counter-Terrorism
The two leaders reiterated their strong condemnation of terrorism in all its forms including terrorism and terror-related incidents in both India and the UK. Both leaders also affirmed that terrorism cannot be justified on any grounds whatsoever it may be and it should not be associated with any religion, creed, nationality and ethnicity.
The leaders agreed that terrorist and extremist organisations need to be denied space to radicalise, recruit and conduct attacks on innocent people; for this all countries need to work together to disrupt terrorist networks, their financing and movement of terrorists, including foreign terrorist fighters.
The leaders agreed to strengthen cooperation to take decisive and concerted actions against globally-proscribed terrorists and terror entities to protect thier citizens, including Lashkar-e-Tayibba, Jaish-e-Mohammad, Hizb-ul-Mujahideen, Haqqani Network, Al Qaeda, ISIS (Da’esh) and their affiliates, as well as tackling the online radicalisation and violent extremism which feeds this.
In the wake of the appalling nerve agent attack in Salisbury, the UK and India have reiterated their shared interest in strengthening the disarmament and non-proliferation regimes against the spread and use of chemical weapons. They shared their deepest concern about the continued reports of the use of chemical weapons in the Syrian Arab Republic. They oppose the use of chemical weapons anywhere, at any time, by anybody, under any circumstances and are committed to strengthening the effective implementation of the Chemical Weapons Convention. They emphasise the need for urgent investigations and underline that the conduct of all investigations of any use of chemical weapons must be strictly in accordance with the provisions of the Convention.
Education and People-to-People
India welcome the best and brightest to study and work in the UK, especially in subjects and sectors that develop the skills and capabilities that will boost the prosperity of both our countries.
The two leaders lauded the successful completion of the India-UK Year of Culture in 2017. The year-long programme saw an unprecedented level of cultural exchange showcasing artistic, cultural and literary traditions in both countries and was a fitting celebration of the deep cultural ties that bind India and the UK.
The leaders welcomed the 70th anniversary of the British Council in India and its work to train teachers, deliver skills programmes for youth, and support cultural exchanges.
The two leaders agreed that it is the Living Bridge between the people of the two countries that gives the greatest optimism that the next generation of India and UK will have an even more robust and stronger engagement and exchange. The leaders agreed to encourage and support this Living Bridge.
Both are committed to making this a strategic partnership, that spans the globe and the century, seeing India's special relationship evolve and improve in the coming years.India encourage  business, cultural and intellectual leaders to exploit the millions of interactions that already link India and the UK, from family to finance, business to Bollywood, sport to science – so that millions more British and Indians exchange and learn, travel, trade and thrive together,said both Prime Ministers.
Prime Minister Modi thanked Prime Minister Theresa May and the Government of the United Kingdom for the warm hospitality extended to him and his delegation and looked forward to welcoming her in India.