HUMAN AND NONHUMAN- ONE AMAZING SAGA……….

Life on earth can be traced back to a history of interaction between living beings and the environment. It is only in the last five hundred years or so a species named Homo sapiens has made a lasting and sever change to the way mother earth interacts with her offspring. The industrial revolution and the last two world wars have made a fast changing in the environment pattern of the world. The unexpected surge of technical and scientific thoughts and products has not only made a lasting change to the behavioural pattern of the modern generation but also threatens our very existence.
In this backdrop it is amazing to think that our young generation is still gets allured by the soft petals of the blooming flowers after a fresh shower, chirping of the birds in silent afternoon, scintillating lights from a fluorescent butterfly. No story can attract the toddlers and the youngsters more than the story of thrilling world of the animals. In this process adults often get puzzled to answer all the quarries that a green mind has in store. And when the animal world is the world under water? They get more fascinated.
Merjella by Yuvaraja Dhayanthi tells the young mind the story of this nonhuman world- an amazing story where they plan a strategy, can make a plan to take revenge , can break trusts just like their human counterpart. In this story two parallel stories run side by side –one under water of the non human world and one above water of the human world. as the story progresses we will discover that a point there remain no distinction between a non human mind and a human mind –their psychology, thinking, emotions ,joy, pain all overlap into a symphony. 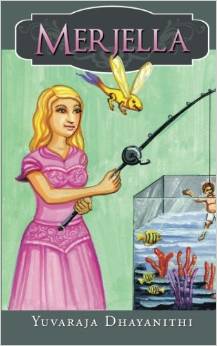 Let us get acquainted with the nonhuman characters of the story-Jella-‘a dark brownish and not so appealing octopus’, the small Qwerty –‘ a bright yellow fish with a vibrant long purple tail and long ribbon like fins’, Bingo-‘the glowing green starfish’ Mimico –‘a brown and white striped octopus with the ability to imitate other sea creatures.’ and it turned out our protagonist Jella is no simple lady! She is the rightful owner of the kingdom of Zypher –ruled by her species Jellopuses! It is the story of treachery and betrayal by which Chiro from the species Malojels took over the advanced kingdom of Zypher- a kingdom where
“Artificial sails and fins were designed to help transport the old and the physically challenged. Sea carts were made out of shells and were widely used to transport goods.