How Deep is Your Love? Raise your voice against Animal Abuse!

"The Darkest corners of hell are reserved for those, who in times of a crisis maintain neutrality."

It is a little challenging not to wake up and voice your thoughts when mornings begin with "news" like this. A little over a year ago an incident that occured in the Delhi zoo where Vijay the Tiger "maulled" a man to death compels you to question- What is the extent to which one can be held responsible for his or her Reactions? As the "responsible" people in power sat and contemplated whether Vijay had turned into a man eater and should be "put down" , it made many of us wonder if "putting an animal down" or "executing and clearing landmasses because they were potential roads" were options commonly resorted to just because they were feasible and easy actions that COULD be performed.

You see, there is nothing special about us Humans. The greatest advantage that we have over other species is that we have the power to choose. The power to choose what we do with our lives, and unfortunately to choose what we do with other's lives. Blame it on an age long struggle to ensure survival of the fittest or simply the lack of anything more imaginative, we humans have become a selfish race, a lazy race which would rather get rid of problems than face them. In light of cruelty subjected towards animals in the past year, I would like to take this opportunity to express grief, sorrow and fury... but lets not forget shame over the actions of my fellow humans.

I have always maintained through my articles that we have been pushed into turbulent, disturbed times where no man and no animal is safe. Seeing acts of atrocities towards animals in specific and this planet in general all over the the world, one begins to question the basic core of his or her own foundations. Are we as a race really so discontent that we look for such outlets to destroy and acquire? I have listed a few events here which in my opinion need to be escalated, need to be pondered upon. Take some time out, click on the links, see whats happening and process it. This happened, but whats important is what can be done about it now that its out there. These events affected me deeply and I cannot wake up everyday knowing this is still happening while I do nothing. Circumstances have made me an activist and I hope that a look into a mere handful of cruelties in the last year will shake your beliefs and awaken your soul as well.

Follow WDC- an organization committed to helping dave whales and dolphins around the world- http://us.whales.org/wdc-in-action/whaling 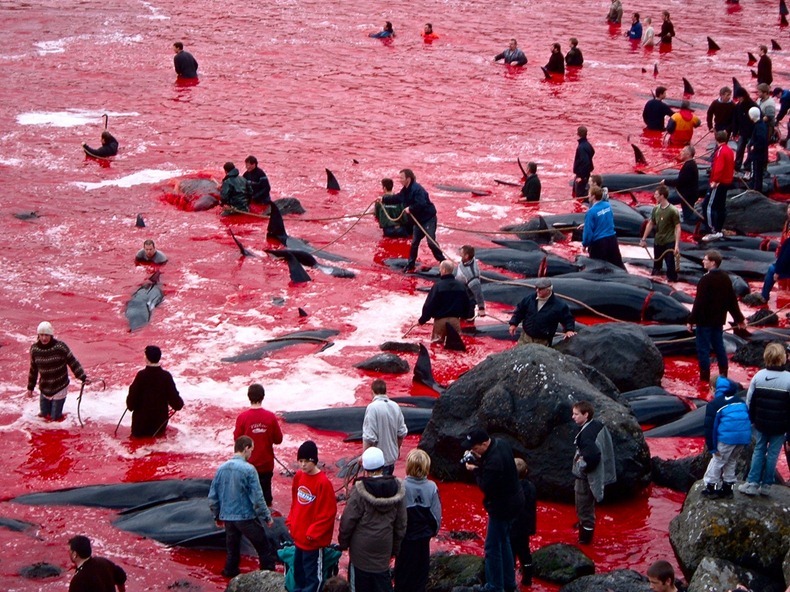 More than 2000 whales killed every year. (Above) A pic from the whale hunting festival, Farow Islans 2015 Upto 10000 Dogs  Tortured, Mutilated, killed and eaten every year in China. Picture from the Yulin festival 2015

To fight Such hunting practices and to help release  whales and dolphins back into the wild in a challenging fight against Sea worlds around the world, follows Ric O' Barry's Dolphin project and be part of a movement which is the need of the hour. Always aiming at #thecoverunsblue.

You can also follow the Ocean preservation society and Mission Blue, which is fighting the never-ending doog fight everyday.

Dolphin killing in Taiji.. Picture from the OVS journalism blog

Be it Cecil the Lion's story who was poached within a sanctuary or the the fight against zoos and parks which use lions as entertainment value-ads, You can follow inspiring leaders like Kevin Richardson or follow World Animal Protection to do your bit and help make a difference!

Kevin Richardson- The Lion Whisperer. Follow him to be inspired each and every day!

Tigers today have advanced towards the endangered species list. There used to be over 100,000 roaming the asian wild with less than 322 left today.

WHY HASN'T THIS MADE IT TO THE NEWSPAPER COVER?

In the name of Fashion?

Skinning of crocodile and snakes for fashion, All in the bags and shoes- http://www.peta.org/issues/animals-used-for-clothing/exotic-skins-a...

Don't get me wrong, I love my bags and shoes, but in today's day and age of alternatives isn't there an ethical way to be fashionable? Be responsible, not callous. As of today, September 2015- Experts claim that there has been a decline in the natural ecosystem and corresponding wildlife by 52%. 52%.. If now is now the time to wake up, I don't know when is. Animal populations have halved, fresh water species have dwindled by 76 %, marine animals show a decline of 39%. Tigers and elephants are being driven towards extinction while the human population has doubled. What now? It doesn't really matter what you work for, if you you remain this apathetic towards the state of your own planet, and of the animals on it. Please live responsibly, and work everyday towards making a change. Little changes DO matter. Follow world organizations, almost all of which have active branches in India. Volunteer, make a difference, and more importantly learn to say NO!

I have been to several animal enclosures around the world, The Tiger temple in Thailand, Sea world enclosures in Asia, elephant orphanages in Sri Lanka...but I honestly believe that we are conditioning animals in a way that is against their nature. Before we forget how we are supposed to exist, let us join hands and do the right thing no matter how hard it may seem. Join the movements protesting against the taming of wild animals for the sake of entertainment and focusing on releasing them into the wild, the only right way to co-exist. And if we do take their responsibility lets take better care and speak up for those who do not have a voice. Let us not come to a stage where we lose faith in humanity altogether.

Join world organizations today- WWF, PETA, Greenpeace International, Greenpeace India, Change.org, Humane society International India- Something. anything. Our own extinction starts with the extinction of every minute species that has died in the name of humanity. There is so much awareness today, everyone is fighting some or the other battle, whether iit involves freedom of animals from circuses, putting an end to animal sacrifice, preventing destruction of mangroves.. but mostly I'll probably just request you to go easy on yourselves, take a moment and decide how you can make a difference. the world is well connected today, it is smaller than we think it is absolutely fragile. Its time to stop taking it for granted and show some compassion to fellow humans, to stray dogs, to animals and to nature.

Maybe it is time to Stop acting like we actually have another planet to go to.

I will #neverstaysilent against animal abuse. #tryme