For me, the United States Coast Guard has always evoked images of heroic rescues, ships caught in Nor'easters, and training sessions on fishing safety—vital acts imparting a straightforward impression.

A discussion aboard the USCGC Seneca with Commander Chuck Fosse, Lt. Commander Camilla Bosanquet, and the Carnegie New Leaders complicated matters. We discussed some of the global and ethical decisions that Coast Guard officers and sailors regularly face.

Since entering under the umbrella of the Department of Homeland Security in 2002, the mandate of the Coast Guard to protect our maritime borders has intensified. In addition to shoring up port security, Coast Guard sailors intercept drug and migrant boats regularly in the Caribbean.

Values of honor, respect and devotion to duty guide the Coast Guard, along with a Coast Guard Ethos developed within the last 5 years. This ethos defines their responsibility to the citizens of the United States, and serves as a framework when deciding how to behave in critical situations.

The mandate to protect citizens of the United States is key when given the mission to intercept ramshackle migrant boats, full of desperate, hungry people yearning to enter our country. The Coast Guard sends the vast majority back to their nations of origin. It's not an easy task, but Fosse points out that without the intervention of cutters like his, half of those boats would be lost at sea to the heavy winds and dangerous currents.

While many encounters with migrant and drug boats require the cutters' considerable firepower—aimed to avoid killing humans on board vessels, but still risky—non-lethal weapons can also be used to avoid injury or death. The Coast Guard is developing a suite of these weapons, which range from rubber bullets to nausea-inducing stink-bombs. But Fosse says sometimes the best tool is patience; if he can stop a target boat from moving with a well-placed net around a propeller, its inhabitants will eventually become hungry, tired, and more complacent. 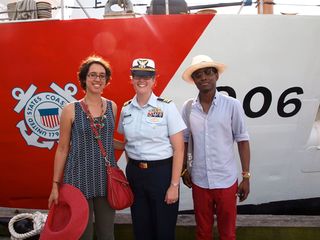 The Coast Guard is also responsible for training the navies of friendly developing nations and enforcing domestic fishing borders. They send teams aboard naval vessels to arrest pirates off the Horn of Africa. In short, their global reach is significant and flies under our collective radar.

The purpose of Fleet Week in New York is to celebrate the sea services. With this fascinating ship tour and exchange of global ideas, the Coast Guard and Carnegie New Leaders put their own stamp on Fleet Week 2012.

Thanks to Lt. Commander Camilla Bosanquet for organizing the tour and conversation. She's a rock star of a Carnegie New Leader!