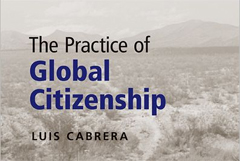 From our latest issue of Ethics & International Affairs:

In his aptly titled book The Practice of Global Citizenship, Luis Cabrera offers a different theoretical basis and approach to human rights. Rather than focusing on the obligations of states, Cabrera's primary level of analysis is the individual and the actions that ordinary citizens might take as a way of promoting and protecting human rights. The most interesting parts of this fine book provide a kind of street-level view of the competing interests and moralities concerning immigration currently being fought in the southwestern part of the United States. On one side are those who act on a humanitarian imperative to aid and assist undocumented aliens. On the other side are groups, such as the Minutemen, who seek to stop the flow of undocumented aliens in the sincere belief they are acting to protect their own fellow countrymen.

Much to his credit, Cabrera has written an ambitious book. The first section provides a theoretical analysis of the individual cosmopolitanism that he calls for. The key message here is the recognition of a shared humanity with all others, but particularly those who are denied human rights protection. Part two is titled "Global Citizenship in Practice," and Cabrera draws upon his extensive fieldwork in the United States and Mexico as well as the qualitative studies he has carried out among African immigrants in search of a new homeland in Spain. In this section Cabrera provides an insightful account of how and why people migrate, but also why some assist others with such efforts while others actively (and sometimes violently) resist them. The third and final section attempts to broaden the analysis further.

In one of the chapters Cabrera praises the integration work of the European Union, which is based on a different model of state sovereignty whereby national borders do not serve as the same kind of determinant of political and social communities. In another chapter, Cabrera calls for the creation of a World Trade Organization parliamentary body as another means of popular participation, thus bringing a much-needed humanitarian perspective to an organization that mainly serves rich and powerful states. And in his final chapter, Cabrera focuses on the need to develop and inculcate individual cosmopolitanism through education—all the while remaining cognizant that states will actively discourage such efforts simply because of the competition in allegiance this could pose for them.

Like many other readers of this journal, I am quite sympathetic to Cabrera's overall thesis, and I am impressed with his ability to tie together an analysis that traverses (appropriately enough) the local, the national, the subregional, the regional, and the global. What he proposes is a much different (and better) world, and his analysis of immigration issues provides a small but telling example of how groups of dedicated people have put their bodies and their minds on the line in pursuit of a more just world.

Notwithstanding this depth, there are arguments here that I either disagreed with or else found missing. In terms of the former, the biggest problem is with the claim that undocumented migration represents a form of civil disobedience—a motive that even Cabrera acknowledges would be lost on those coming over the borders. Not only do I think Cabrera is wrong on this matter but this kind of overreaching threatens the sounder parts of his analysis. Having said that, in many ways I wish undocumented migration did have a much deeper political element to it. On the book's cover are two young Mexican boys who look as if they are about to climb over the border. Perhaps their journey serves as a form of civil disobedience, although I would dispute this. But conjure up a much different kind of scenario and a much different kind of photo—one in which thousands are openly and defiantly massed at the Mexican border demanding their basic human rights.

There are also important ideas that are left out. Cabrera, by focusing so much on those who are directly engaged in migration practices, has little to say about individuals in other parts of the country who might also engage in a form of global citizenship, albeit of a different order—for example, through promoting immigration reform itself. Given the "special relationship" between the United States and Mexico, one measure that might be pushed for is legislation that would greatly increase the number of Mexican nationals who are able to migrate to the United States legally. The larger point is that even on this particular issue there are other ways in which "global citizenship" can be enacted besides leaving food and water on migrant routes.

Finally, the concept of global citizenship can (and should) go well beyond the immigration context. Certainly, Cabrera is aware of this and his chapter on the Word Trade Organization parliament is an attempt to capture some of this. But taking global citizenship seriously also requires dealing with such issues of global impact as the nature and quality of foreign aid, domestic subsidies and trade barriers, and the regulation of home state multinational corporations.

Luis Cabrera has written an important book that shows global citizens in action. It is also a book that should prompt the rest of us to ask what we must do.

The author is the Belk Distinguished Professor at the University of North Carolina–Asheville. His recent books include The Politics of Human Rights: The Quest for Dignity (with Sabine Carey and Steven Poe, 2010); Universal Human Rights and Extraterritorial Obligations (edited volume with Sigrun Skogly, 2010); and Global Refugee Crisis (2010).