Satya, Treata ,Dvapara-all three Yugas has gone by. The god is still asleep and the world is gaining its potentiality. Both the positive and negative attitude within a person is missing and so human has started to justify every action under the clout of dharma-nobody knows whether it is right or wrong. Pratiharas-the guardians of the mortal world are guarding this world like the apple of their eyes so that no trespassers can penetrate into this world. The sixteen states of the AryaVarta are in a state of mutual coexistence where republic like Vaishali is in a state of cooperation and peace with a powerful kingdom like Magadha. Some savage tribes are trying to challenge the powerful states like Magadha- although their feeble efforts are crushed every time like war hammer of a Magadha soldier crashes the head of a helpless tribal soldier.
But this time it is something unusual, something highly improbable starts to happen!
In this backdrop starts this fascinating saga of duty, honour and revenge –“Age of Apostasy-knife edge” by Abhijeeth Hiliyana-where mythological imagination touches its zenith and historical facts gives a flawless replication of sixth century B.C. India. It’s a strange world where supernatural fights with the natural, irrational locks horns with rational, Dharma is in a battle with Adharma and untruth is in a truce with truth. Is this apocalypse? Or something else?
What is happening at this transition of times? 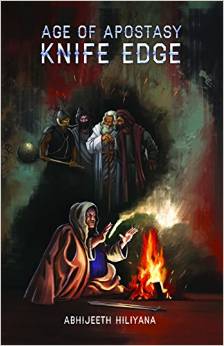 Let us take our gaze to this wonderful story which literally hooked me up from cover to cover! this is year ending time in our office and we hardly get time out of home and office but this book compelled me to finish the book in one go!
Savage, barbaric tribes are trying to destabilise the frontier of Magadha Empire and it is usual for them to engage in conflicts with the famed general of the Magadhian army-Gaja and it is also usual for them to get defeated at the hands of the army of Magadha and their brave heart Mahasenapati. But this time something is different.