Had two minor incidents last quarter this year where car bumpers barely bumped each other and costs $500+ damage, for cosmetically repainting the damaged plastic wraparound bumper (body shop has to remove bumper repaint (color coat plus clear coat; no physical damage). The first incident involved a lady parallel parking her Accura behind my wife's Chevy Impala and scraping the right rear bumper with her front right bumper (damage to both cars was cosmetic paint). The second incident…

It seems to me, a cyberpeacecitizen, that many important fleeting messages/expositions on "world peace and planet survival" are lost or "deadended" in social media because of fleeting opportunity of conscientious instant action or just "indifference" of fellow citizens of the world to re-tweet/comment ?

Further, the deluge of social media data from millions/billions of sources requires collaboration/ synchronicity of sources to achieve most important messages going viral. …

"What is the spirit of moderation? It is the temper which does not press advantage to its bitter end; which can understand and will respect the other side; which feels a unity between all citizens, real and not the factitious product of propaganda; which recognizes their common fate and their common aspirations, in a word, which has faith in the sacredness of the individual."

"I heard the bells on Christmas Day. Their old familiar carols play; And wild and sweet their words repeat "Of peace on earth good will to men."

And in despair, I bow'd my head; "There is no peace on earth", I said, For Hate is strong, and mocks the song "Of peace on earth good will to men."

Till ringing, singing on its way, The world revolved from night to day, A voice,a chime a chant sublime, "Of peace on earth good will to men !"

Give a Christmas Gift of Conscience - T'is The Season !

T'is the Season of  "Joy to the world"; the birth of the Prince of Peace in a manger in Bethlehem  (no room at the inn)>

T'is the season of examining our consciences and realizing: "We Are… 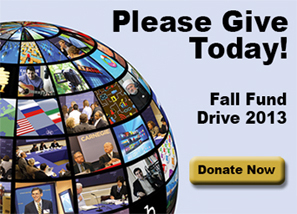 "I believe in the supreme worth of the individual and in his right to life, liberty and the pursuit of happiness."

I believe that every right implies a responsibility; every opportunity an obligation and every possession a duty."

"The worst sin towards our fellow creatures is not to hate them; but to be indifferent to them; that's the essence of inhumanity."

"Money is indeed the most important thing in the world; and all sound and successful personal and national morality should have this fact for its basis."

"Do you think that the things people make fools of themselves about are less real and true than the things they behave about ? They are more true; they are the only things that are…

"To everything there is a season, and a time to every purpose under heaven:

"No time like the present season for "love" and "peace"

"Without commonly shared and widely entrenched moral values and obligations, neither the law, nor democratic government, not even the market economy will function properly." Vaclav Havel."

In my opinion, one needs  first and foremost a conscience and courage to act to be a "moral leader".

RELIGION: Belief in and reverence for a supernatural power or powers regarded as creator and governor of the universe. American Heritage Dictionary

"Fanatical religion driven to a certain point is almost as bad as none at all, but not quite." Will Rogers

"The only religion is conscience in action." Henry D Lloyd

"It is in our lives, and not from words that our religion must be read." Thomas Jefferson

"Is it not strange…

FORGIVE: To excuse for a fault or an offense; pardon; to renounce anger or resentment against;

refrain from imposing punishment or demanding satisfaction for an offense. American Heritage

"It is in pardoning that we are pardoned."  St Francis of Assisi

"We forgive to the extent that we love." LaRochefougauld

"But modern wars are won not only on the battlefield but in the television studio, the diplomatic lobbies of international organizations and, perhaps most of all, in the hearts and minds of civilian populations."

"They all laughed at Christopher Columbus

When he said the world was round

They all laughed when Edison recorded sound

They all laughed at Wilbur and his brother

When they said that man could fly

Wireless was a phony

(One of these days in the 21st Century - Individual CyberCitizens will say "Enough death and destruction; I am outraged at this insanity of humanity and will cry out/RT  in unison…

"Experience declares that man is the only animal which devours its own kind, for I can apply no milder term to the governments of Europe, and to the general prey of the rich on the poor."  Thomas Jefferson

Seems to me this Jefferson observation, is especially applicable to today's Shiite-Sunni Insanity of Humanity, purposely killing innocent Muslims and blowing up Mosques.

"Let there be peace on earth and let it begin with me,"&U-UsAll.   "Peace be…

So many great Christmas Songs. Here are my nominations for the "Top 10"

7. CHESTNUTS ROASTING IN AN OPEN FIRE

8. I'LL BE HOME FOR CHRISTMAS

9. I HEARD THE BELLS ON CHRISTMAS DAY

10. LET THERE BE PEACE ON EARTH

What is (are) your favorite Christmas song(s) ?

Nelson Mandela you were one of the Greatest Peacemaker Politicians & Human Beings of All Time and will be remembered by your fellow South Africans and World Peace Citizens as a Modern Prince of Peace, especially this 2013 Christmas Season.

You possessed, in abundance, the rare virtues of: love, forgiveness, perseverance, and believed that all of humanity is created equal and endowed with "unalienable rights".You followed the "Golden Rule":

Here are my top three…

T]is the season for celebrating the birth of the" Prince of Peace."

The re-telling of the story of the Three Wise Men following the orient star to the Manger In Bethlehem, where Jesus Christ was born.

Having visited the church of the Birth Site in Manger Square and bought a hand-carved  manger,  I recall the aura of mysticism that fell upon me, being there on the alleged spot.

Yes, the beauty of Christmas is celebrating the birth of Jesus, going to…

As I Ponder the subject question, I am reminded of the "Universal Buying Motives: Gain-Need-Desire-Embarrassed Not To Have."

Both Gain and Need are the "rational" motives. In the cyberpeacefare case, the Need and Gain of World Peace and Planet Survival " are "self evident", especially to Members of GEN.

With regard to Desire, it seems to me we all desire the system objective function of Cyberpeacefare (World Peace and Planet…