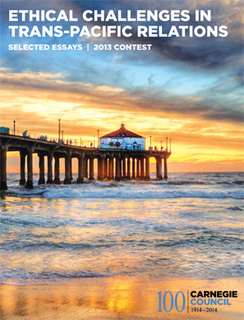 We just wanted to congratulate all the participants and especially the winners of our 2013 Trans-Pacific Student Contest. The entries were of very…

This Is How You Lose: Against Political Pressure by Militarism

The story is familiar: US sees Asia as a strategic region for reinforcing its military hegemony, prompting its “pivot to Asia” policy. China views the US as a competitor for regional dominance. Long-time American allies Japan and South Korea see the US as a deterrent to possible Chinese coercion. Southeast Asian nations do not take explicit sides but opt to use the great power rivalry as a hedge against dominance by either power. We hear debates about US responsibilities to allies,…

On the international level, the significance of the relationship between the United States and China is twofold. Firstly, these two nations stand alone as social and political powerhouses and secondly, they heavily depend on each other economically. The United States may have the largest military and economy, but China’s economy continues to grow at an unprecedented rate, most notably serving as the world’s greatest exporter of goods such as electrical machinery and…

Many aspects of the average American’s material lifestyle can be attributed to trade relations between the United States and Asia. A significant proportion of the clothes they wear, the toys they grew up with, and even the technology they use, was produced somewhere in Asia. Commerce with major developing nations like China and Indonesia is reportedly crucial for America's own continued economic prosperity, since its…

Time for an Alternative to Economic Sanctions?

The one of the greatest ethical challenges facing U.S.-Asia relations focuses on the continued struggle to strike a balance between regional peace and security, individual human rights, and state sovereignty. All are important, but difficult to reconcile the inherent tensions among them. This struggle is highlighted in the history of the Asia, and through the current relationship between the United States and the Democratic People’s Republic of Korea (North Korea). The…

The Ethical Challenge in Sino-U.S. Relations: The Threat of War

The Ethical Challenge in Sino-U.S. Relations: The Threat of War

The greatest ethical challenge confronting the U.S. and China is that in both countries, decision-makers are increasingly scoping out foreign policy strategies that will inevitably lead to military conflict. On the U.S. side, decision-makers often look for military solutions to what are really political problems. They consider geopolitics, and in fact fall back on geopolitical fatalism, in…

The following essay was written by two female writers, one from Indonesia, and one from the United States. The Indonesian writer professes to be a follower of the Muslim religion and the American writer professes to be a follower of Christ. It is important to note that these two writers were friends face to face while the Indonesian writer spent time in America. The experiences that both of them had during their friendship have shaped both of their lives. They intend to portray the depth of…

The Ethical Implications of Soft Power: Reexamining the Peace Corps in Southeast Asia

As we enter Obama's second term, U.S. state-funded international volunteer programs pose the greatest ethical challenge in U.S.-ASEAN relations. Many of these programs that promote Western ideals and reaffirm U.S. power through peace-oriented development programs, have been in existence for decades. One example, the Peace Corps, was established in the wake of the Cold War, to exert U.S. soft power upon the world through cultural exchange programs. Thus, these programs have served…

North Korean Gulags: And Yet,

If the prison camps of Auschwitz were still running in full operation today, would the entire global community collectively stand by and allow them to continue? One would think not. And yet, here we stand today. Even while the bellicose and belligerent regime of North Korea once again commands the world stage through its threats and showmanship, still the issue of its extensive system of concentration camps slips through the gaps of the world’s attention. Through the testimonies of escapees…

Bioethical challenges and progress in Singapore and the United States

So as to achieve happiness, prosperity and

progress for our nation

How do we define progress? According to Phil Robertson, deputy Asia director at Human Rights Watch, “Singapore’s status as a world-class economy has not kept it from having a remarkably poor record in…

The U.S., China, and Cybersecurity: The Ethical Underpinnings of a Controversial Geopolitical Issue

The rise of Asia is one of the most significant developments in the twenty-first century geopolitical landscape.  Pundits who dubbed the twentieth century the “American Century” are now predicting that the twenty-first century will be the “Pacific Century.”  Asia’s ascendance is driven in large part by the return of China, whose economic and political might has been growing at unprecedented speeds, to a position of international prominence.  China’s re-emergence as a significant global…

The ethics impact on Sino-U.S. relation when Apple lost its value

Traditional ethics theory of international relation concerned much more moral significance in acts of state and diplomatic policy, its core is the relationship between the moral and interest.  At present, the scope and impact of ethics in international affairs are constantly expanding. Specification of the values of human rights, democracy, humanitarian intervention, distributive justice is undergoing a significant evolution. If the…

Between the United States of America (U.S.) and the People’s Republic of China, many people have preconceived notions about the ethical standards that each of these countries uphold. However, it is important to move away from thinking about these countries individually, because the world that we live in today is interconnected and these complex associations can often be invisible. Since no country exists in complete isolation, it is imperative for…

The 21st century has fostered new global developments, conflicts, and partnerships, and the evolving relationship between the United States and China is riddled with all three.  In the last decade, multinational corporations based in the U.S. cut their domestic workforces by 2.9 million, while increasing employment overseas by 2.4 million, according to…

The Greatest Ethical Challenge Facing the United States and Indonesia

Treaties are agreements that sovereign states agree to uphold under international law.  From preventing discrimination for women to upholding the environmental sanctity of our planet, treaties reflect the important issues that the international community has worked to shed light on.

The United States of America and Indonesia have ratified a plethora of treaties over the years, including the International Covenant on Civil and Political Rights, the Convention on the Elimination of All…

Why Corporate Social Responsibility is the Greatest Ethical Challenge to U.S.-China Relations

Is the sole responsibility of a corporation to maximize profit, in turn increasing the wealth and income of shareholders, or must companies acknowledge and address ethical and societal concerns caused by their operations? Milton Friedman argued in his book, Capitalism and Freedom, that corporations were only mechanisms for deriving profit. His ideologies laid the primitive foundation for corporate action in relation to society. However, corporate social responsibility (“CSR”) is gaining…

The Opportunities and Perils of embracing Myanmar

The United States is cautiously engaging with the nominally civilian government of Myanmar (Burma) as that country implements reforms after five decades of authoritarian rule. An ethical dilemma exists in whether the U.S. should engage further in scope and depth with Myanmar and try to promote democracy and achieve geopolitical goals while de-emphasizing the country’s past and on-going human rights violations, or to remain disengaged until human rights conditions improve greatly and those…