Democracy is generally defined as the system of governance wherein the citizens of the country exercise the power to choose their representatives in the government through free and fair elections. Etymologically, the word ‘democracy’ can be derived from the Greek words ‘demos’ and ‘kratos’, meaning ‘people’ and ‘power’ respectively. Abraham Lincoln… 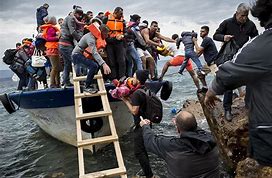 The real cause of emigration should be as result of poor democratic citizen fully participating in matters of state affairs.

Miguel Chioma Eluchie Command Secondary School, Kaduna, Nigeria High School JSS 2 Once there is life, there is hope. Then poverty will be a thing of the past. If only there is life. This thought is what always goes through my mind each time I suffer from hunger and struggling to survive as a result of harsh economic situation in my country. As I watch documentaries on television, I see the desperation by many youth’s particularly African youths risking their life in a bid to cross to Europe…

A contemporary perspective of democracy

Is it Important to Live in a Democracy?
“Democracy will soon degenerate into anarchy.”

Thumb up for good governance

Yes, it is important for an individual to live in a society that is primarily governed by the core democratic principles.

Calling US leadership into question: international human rights institutions under pressure in the Trump Era

From the UN Human Rights Council to the International Criminal Court, international institutions and human rights bodies have been under pressure by the Trump Administration for the past year or so.

The Administration’s actions have had an adverse impact on US leadership and US interests in the international arena and in human rights leadership.

The US left the UN Human Rights Council in June 2018, as former US Ambassador to the United Nations in New York, Nikki R. Haley and US…

Indonesian Perspective in the Case of Democracy : Is it Worth Living in a Democracy?

Indonesian Perspective in the Case of Democracy:

Is It Worth Living in a Democracy?

Luh Devany- age 18, currently pursuing her bachelor degree in Human Resource Management of President University Indonesia. Her interest in International Relation, Law and Politics lead her to discover and…

Being from Mexico, democracy is one of the…

Political stands as the road of ethics.

Political stands as the road of ethics.

The twenty first century is known as a period of freedom, where people can easily choose (or at least it should be that way) the hair color, clothing, partner, friendships, even gender they like the most, or they identify with better. Most importantly this freedom leads the society to a very interesting decision, the most important of them, because this one will not only have…

The word “democracy” is being spread and talked widely among the people living in this twenty-first century.  Reversely, we, 21st generation, are living in the democratic world.  After that, in modern politics, democracy has come to be so far-reaching accepted. However, we need to know what is democracy? What are democratic norms and values? How much is it important for us?

It cannot be denied that there are various…

Look at the History and look at the world around us, democracy contributes to safety and prosperity, both in national and International life.
Strobe Talbott, US Deputy Secretary of State, 1997 speech
The story of the origin of word “Democracy” clasps to Athenian democracy and ancient Greek word demokratia : ‘Demos’ means ‘people’ and ‘kratia’ means ‘power’ literally meaning ‘people’s power.’
But the question arises…

The situation that I will be writing about in this essay is democracy in Mexico and the rumors that Mexico will become the new Venezuela due to the results of July 1st elections.
Mexico is a…

¿Do we really participate in the democracy?

According to the spanish Royal Spanish Academy (2018) , democracy has the meaning of “political doctrine according to which sovereignty resides in the people, who exercise power directly or through representatives”. But does it really happen in the countries that have that  government system? At least in Latin America and particularly in Mexico it does not happen.

We are living in a system…

Is democracy a “must” in society as a whole?

What cross in your mind when you hear the word democracy? Is it the actual state of our countries or is it the image of and ideal place to live, where every citizen has the power to decide on what is being done and to have the power of electing who is going to be the next federal representative? Well, this last part is what democracy really is.

As a society we define as a democracy the act by which our representatives are elected by secret ballot and by majority of the same in a process that is completely transparent in the eyes of all of us, in what we might know as a mutual agreement between each and every one of the factors that are part of the system in an active and efficient way.

Today we live in a world that is full of falsehoods and omissions in the democratic act, is something that is not seen everywhere but…

Is it important to live in democracy ? #essaycontest2018

it important to live in a democracy?

Currently, the Mexican population lives a representative democracy and is often perceived only as a way to gain power, according to a survey conducted by "Latinobarómetro" last year, 56% of Mexican citizens believed that democracy is adequate for elections but does not represent the ideas or ways of thinking of the people (The financial, 2017); In other words, there are people who prefer not to vote on Election Day…

It is important to have one strong leader

The Economist Intelligence Unit carries out an annual evaluation for 167 nations in the world. Through it, the different political regimes that govern them are identified. The…

Is it important to live in a Democracy?

The nature of democracy is quite simple. Only 5 words: the power of the people. But in fact, it turns out that its realization is quite problematic.

I think every person who has ever faced economic theory has heard of the principle of 20/80 (Pareto Act). In this case, its interpretation sounds like: 20 percent of the world's population possesses 80 percent of its benefits. Agree, it's not fair. We are all born in equal conditions and no one has the right to belittle our rights and…