The world is filled to the brim with issues to be resolved. Every time you turn on the television there are news channels reporting on “the worst shooting in history”, which is a title that seems too often broken. Scientists continue emphasizing our planet’s imminent downfall due to global warming, proven from an increase in the frequency of catastrophic geologic events and the rising sea levels. Amounts of people living in slavery are at an all time high and continue to grow. Poverty…

"Connectors appreciate the world and everything in it. The same connection that they  experience with nature they feel toward all beings, including those who lived before and those who have yet to arrive.  They have a consciousness of the oneness, and therefore they make no distinction such as them or those other people.......Therefore connectors aren't surprised when synchronicity or coincidence brings them the fruits of their intention........"  Dr. Wayne W. Dyer,…

Today's world is faced with challenges like hunger and food insecurity, unemployment, poverty, gender discrimination and inadequate security across the world which have affected human beings in all aspect of life being it political, economic and social cultural development. Today almost 10 million graduates who churned out of over 668 universities in Africa do not get job and as at 2017 global unemployment is expected to rise by 3.4 million and from the world hunger statistics,…

The beaut they say about the human race is that it's a spur to our highest achievement and an incentive to our worst nightmare, hence it's been sod's law since primordial time that with great advancement comes great chaos, as time begets time and humanity evolved in attitude, character and invention so came the birth of all global social Ill, war, terrorism, kidnapping, ritualism, human sacrifice e.t.c. To these I'll add religion the most vitiating of all global Ill.
This is indeed a…

Carnegie Council Appoints Nine Fellows for the Project, "The Living Legacy of the First World War"

Carnegie Council for Ethics in International Affairs is pleased to announce the selection of nine fellows who will receive stipends and other support to pursue research under the project "The Living Legacy of the First World War." The project is supported by a grant from the Richard Lounsbery Foundation. The selected fellows will pursue original research and writing for…

As Brubaker rightly says “Citizenship is a universal and distinctive feature of the modern political landscape.” Every state formally defines its “imagined community” by publicly identifying the attributes of its citizens and in consequence the attributes that constitute its non-citizens or aliens. Importantly, according to each state, citizens have certain rights and obligations which constitute their legal equality. However, globalization has increasingly altered the position and…

the importance of foreign direct investment

Today I'll be talking on terrorism,its effects and how it can be exterminated. The word "terrorism" isn't unfamiliar to anybody since this barbarous act has aggravated our lives awfully. We constantly hear about the unfavorable impacts of terrorism in the news and read about it in the newspaper. The administrations/legislatures of all countries are working tirelessly to ensure that terrorism is totally eradicated but still can't get rid of it. The most hazardous and destructive terrorist act…

Image: students from the University of Buraimi, Oman, promote awareness of how to fight climate change in a local supermarket

October 18, 2017 marked the fourth annual Global Ethics Day, with participation from over 60 organizations and individuals from 31 countries on five continents. Founded by Carnegie Council in 2014 to celebrate its…

Carnegie Council for Ethics in International Affairs is pleased to announce its two annual international contests: an essay contest for teachers and students on the world's greatest ethical challenge, and a photo contest for students on climate change.

Whether you choose to express yourself in words or in photos, we're looking for thoughtfulness and originality.

The deadline for both contests is December 31,…

(Did my duty and voted my conscience in the Virginia Elections today. CyberPeaceGadfly)

The Ethical Challenges of the Online World Remain Deeply Unaddressed

When it came to light that entities connected to the Russian government had engaged in a series of digital actions, ranging from purchasing misleading ads on Facebook to hacking and distributing internal political campaign emails, designed to interfere in the 2016 United States presidential election, there was no shortage of press coverage. Both traditional and new media sources have devoted, and continue to devote, a great deal of coverage to the issue, and understandably so. One does not…

Violations of the right of the media in the Arab world.......

Freedom of opinion and expression or unwilling to media freedom in particular is considered one of the important pillars of the rights and fundamental freedoms as women of the right to democratic freedom and oxygen, on the other hand, on the other hand, the scheme as the most important tools that the individual needs through the right of participation in the view and discuss the different views of the management of public affairs and the town of and putting the public opinion, through which… 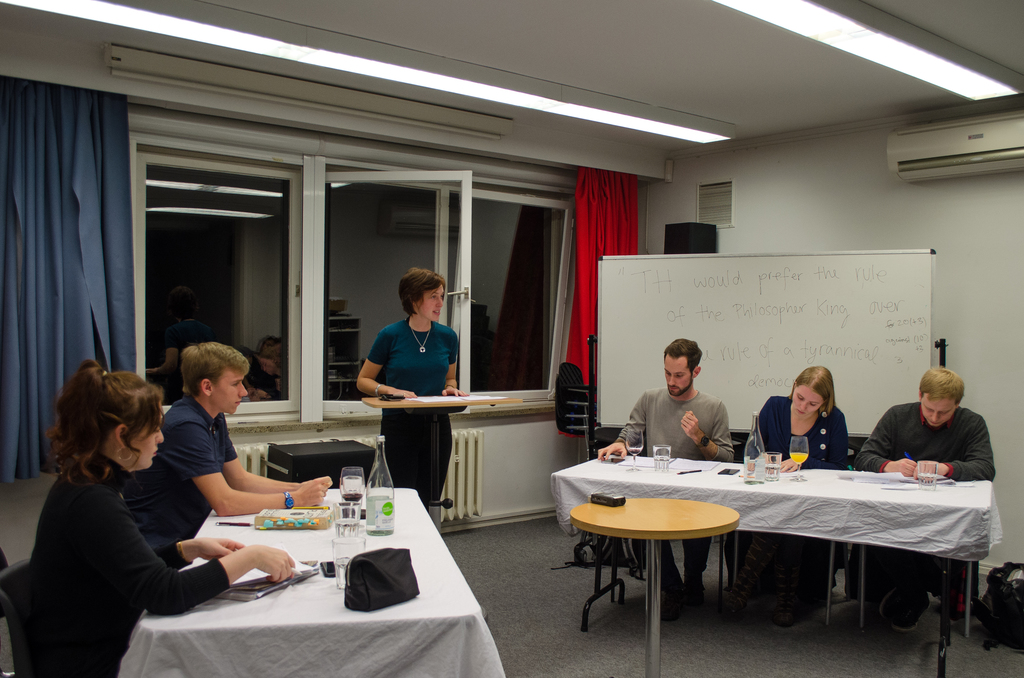 Bard College Berlin’s Politics, Rhetoric and Debate Society and the Berlin Debating Union e.V. debated the motion "This house would prefer the rule of the philosopher king to a tyrannical democracy" in a public event. Based on Plato's "Republic" the debate discussed the role of philosophy in politics and the different forms of governments with their…
Continue

From October 15-21, 2017, Devin Stewart, senior director of Carnegie Council's Asia Dialogues program, led a group of 12 Pacific Delegates from seven countries and a diverse set of…