I’m reminded daily that the world is ending. I can’t count the number of school shootings within memory, and living in a country at war has become a constant rather than a variable. However, these things seem distant and irrelevant most days. Yes, apocalypse is irrelevant. My separation from frontlines causes me to feel that the United States is at war rather than in war. So many sources tell my generation of imminent disaster that it’s…

Can China and the US Neutralize the Ring of Gyges?* 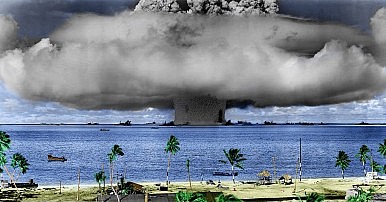 Plato foresaw how the technological imperative can risk a fragile peace.

To understand the importance of education, let’s go through the dialogue a distressed student named “Rama” has with his self-created alter ego character named “Shyam” in his mind while he is dressing up for school.

It is a common saying that scientists don’t believe in God, but here are we, in a university of technology studying science. You can’t talk about science without technology, they are like twins, and they are like couples, complementing each other. Science and religion are separately seeking for the truth, the fundamental truth about human existence and our universe. However, both use different approaches. While religion seeks the truth through spiritual means and morality, the other applies… Continue

Missing The World without Conflict and War

What would you like to see happen during this century to make a world a better place?

«Life is divided into three terms - that which was,

which is, and which will be.

Let us learn from the past to profit by the present,…

David defeated Goliath in the recent Romanian presidential elections which centered on living standards, corruption, and the degree of Western orientation in a troubled region. The voting was a spectacular proof of solidarity between Romanians living abroad and the country’s urban electorate shaping political outcomes in their country. Harnessing this emerging identity might be an important key for the future prospects of the 20 million Romanians at home and the 4 million around the…

A few thoughts to be shared with you today:

Word games are destructive. Become the generation who serve and have no expectation to be served by another. Do as much as you can yourself first before delegating it to others. Life on the planet will only change through the continued efforts of authentic human beings. We are all more than any one culture or tradition. Remember therefore who you are at your core.

Carnegie Council is delighted to announce the winners of…

To The Gang: The answer is no - NEVER! Be at peace and the world will become a happier, safer more enjoyable place. Stop bullying people who do not believe in your empty promises or bedtime stories.

Accept that we are in the 21st century and new better ways of living are open to all. No domination or crusades applicable any longer.

If you want cyber peace, let it begin with you first. Good advice - be a genuine friend, not a predator or salesperson. We all have freedom of…

Ethics for a Connected World: The Carnegie Council Centennial Roundtables Carnegie Council's quarterly, peer-reviewed journal, Ethics and International Affairs, has recently published a collection of symposia and roundtables in honor of the Council's centennial year. This issue focuses on the some of the Council's …

When I've started reading the novel The many lives of Ruby Iyer by Laxmi Hariharan my first reaction was-oh, so it’s the story of a girl next door, fighting against all odds, struggling and surviving in a hungry Metro city, detached from her family where thousands of greedy eyes following her every move, trying to exploit her in every possible way and ultimately she triumphs against all odds! I’ll read some fifty pages of it and then the story line will get lot more predictable and finish…

"Whatever mitigates the woes, or increases the happiness of others, is a just criterion of goodness;and whatever injures society at large, or any individual in it is a criterion of iniquity." Oliver Goldsmith

good: 1. Being positive or desirable in nature; not bad or poor; a good experience;good news 2.a. Having the qualities that are desirable or distinguishing in a particular thing; a good exterior paint; a good job b. Serving the desired purpose or…

Generation Y may not ever realize how it bleeds when your country is partitioned-wired fences going straight through your home and right through your hearts. It is very hard to make them realize what partition did mean to the people of India-especially in this era of LPG (liberaralization, privatization, and globalization). That extremely difficult task has been accomplished with extreme ease by An Indian in his novel India Was One.

The prologue of the story is a bit…

Romanian Presidential elections at a threshold in democratic consolidation

First round of Romanian Presidential Elections took place Sunday, November 2nd with 14 candidates vying for the votes of over 18.3 million electors formally residing in the country as well as a truly sizable yet unknown number of citizens living abroad.

The run-off round with the top two candidates will be held on November 16th seeing Current Prime Minister Victor-Viorel Ponta, who scored a comfortable lead, run against trailing opposition contender Klaus Werner…

November 2014 Question of the Month: Evaluating Responses to the Ebola Outbreak