The "Cape Town Statement on Geoethics" 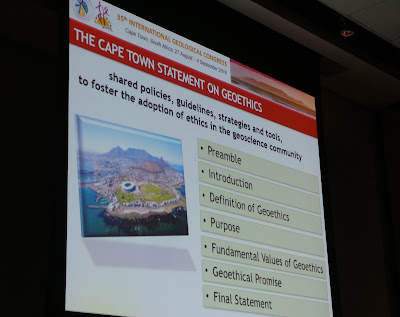 The "Cape Town Statement on Geoethics"

IAPG considers the 35th IGC - International Geological Congress, held in Cape Town (South Africa), the event that opens a new phase for Geoethics and for the Association. In order to celebrate this passage, the IAPG Drafting Committee, formed by Giuseppe Di Capua, Peter Bobrowsky and Silvia Peppoloni, has put together the "Cape Town Statement on Geoethics" (CTSG), a document to be considered as the product of an international effort to focus the attention of geoscientists on the development of shared policies, guidelines, strategies and tools, with the long-range goal of fostering the adoption of ethical practices in the geoscience community. The final document sums up all the values, concepts, contents developed in the first 4-year activity of IAPG, giving a perspective for the future development of geoethics. The CTSG has been announced during the opening keynote speech by Silvia Peppoloni (IAPG Secretary General) in the first IAPG session on geoethics at the 35th IGC. After the congress, the draft version has been sent for comments and suggestions to all the IAPG officers (members of the Executive Council, Coordinators of the National Sections, Corresponding Citizen Scientists) and to the 35th IGC Champions of the Theme "Geoscience Professionalism and Geoethics". Once improved (thanks in particular to Nic Bilham, Martin Bohle, Andy Clay, Emilia Hermelinda Lopera Parejas, David Mogk), the final version has been ratified by the Executive Council of the IAPG and finally published in the IAPG website.


The concepts, values and views on individual responsibilities of geoscientists, expressed in the "Cape Town Statement on Geoethics", reflect an international consensus.

The statement aims to capture the attention of geoscientists and organisations, and to stimulate them to improve their shared policies, guidelines, strategies and tools to ensure they consciously embrace (geo)ethical professional conduct in their work.

The "Cape Town Statement on Geoethics" contains the new formula of the "Geoethical Promise".

Replies to This Discussion